As March is coming to a close, it’s finally time to share crafts related to bunnies! I’ve been busy in my craft room again, creating patterns and crafting for spring and the upcoming Easter. This time I’ve got an Easter craft ready for you – a bunny crochet keychain pattern for you. This time of year, you can never see enough bunnies hopping and eggs rolling.

We know that planning, decorating, and gifting can be a challenge. We want to take the pressure off your shoulders by sharing DIY craft ideas and inspiration. Today’s bunny crochet keychain is a versatile accessory. If you don’t feel like making keychains, you can turn them into a pendant or ornament using various materials.

With the free crochet keychain pattern and detailed instructions, you’re sure to crochet a few of these bunny keychains or bunny charms within a day. Thanks to their minimalist look, they’re perfect as gifts for young girls and adult women on all sorts of occasions, especially as gifts for birthdays and Christmas.

This crochet keychain pattern comes in two designs and sizes! The mommy bunny has a larger body and a more mature look, while the daughter bunny has a smaller build and more vibrant colors. If you’ve a daughter, crochet them both so you can hang matching accessories on your bags together! Or make a set of this crochet keychain for your friend and her daughter.

And while you’re at it, crochet this stuffed bunny as a gift for her, too. We know how much little girls love their stuffed animals.

Here’s a closer look at the crochet bunny keychain. Mommy Bunny’s body measures about 4.5″ x 2.75″, while Daughter Bunny’s is about 2.75″ x 1.75″ (not including the keychain, tassel, and ballerina skirt).

We managed to keep the materials to a minimum. All you need are some keychains and crochet raffia yarn in different colors.

You can also choose a different type of yarn of your choice. However, using other yarn weights may change the size of your crochet bunny. The good news is that the size isn’t really important for a crochet keychain. But if you want to get the same results I did, check out the yarn I used.

You can also add a tassel or a little bell with a snap ring if you want to make it even more unique.

The tools are the usual crochet kit – a 2.5 mm crochet hook, a stitch marker, a tapestry needle, and a warm iron.

The steps are pretty simple, and it’s an easy crochet keychain for beginners. To summarize, you need to crochet the ears and the pink bow first before moving on to the face. Then you can complete the bunny crochet bunny keychain by adding a key ring and the tassel or a ballerina skirt.

Scroll down to see the written crochet pattern and detailed step-by-step instructions with pictures. If you have trouble understanding any part of the instructions, we have a crochet guide for beginners that you can use as a guide.

The crochet pattern is in American crochet terms
This pendant pattern is made by joining 3 pieces together; it begins from the ears and works toward the Face.

Follow the crochet pattern to complete the Daughter Bunny pendant.
Similar to the Mommy Bunny, after crocheting, press the crochet piece flat with a warm iron and then sew on the pink bow and nose.

Attach the ballerina skirt, a small bell, and a keychain to complete the Daughter Bunny crochet keychain. 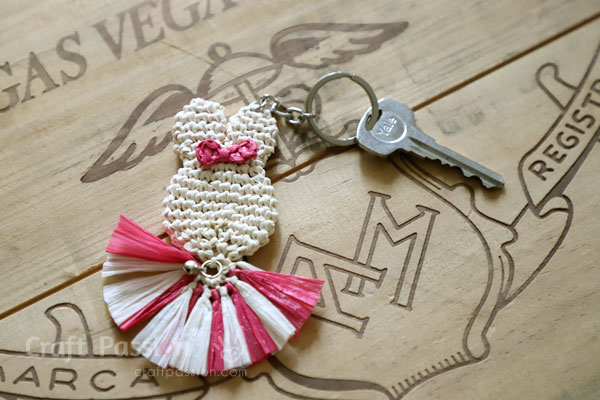 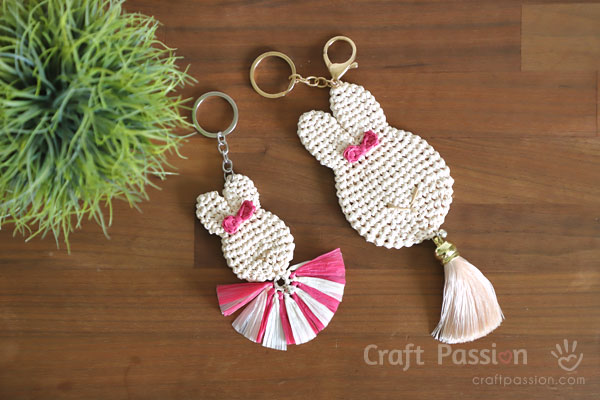 Get the full article at https://www.craftpassion.com/crochet-bunny-pendant/

How do you print out the pattern??? I can't find any link to do so.

There a printer icon at the pattern page, you may use that print.