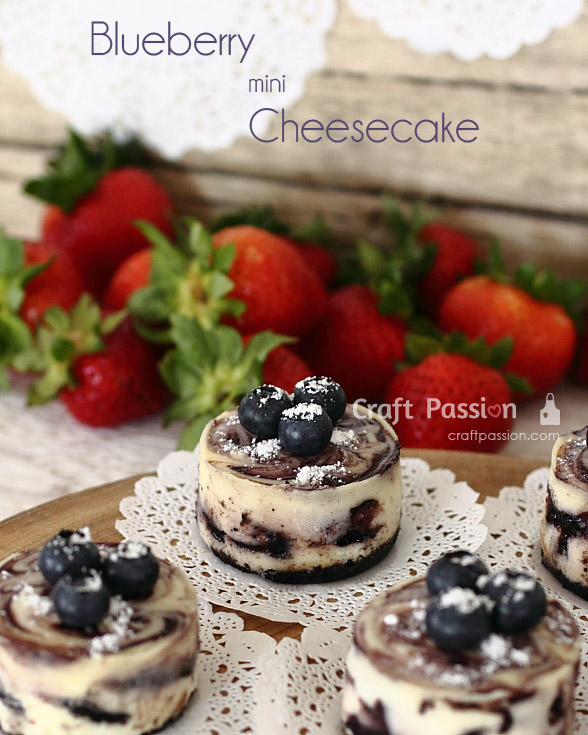 We need something to cool us down in the hot and hazy days, we need some chilled dessert to eat…. ok, enough for the whining, actually I was finding a good excuse to bake something I like to eat but too sinful to eat — the Blueberry Mini Cheesecake!!!

Before this, I have never been a big fan in cheesecake baking as I knew that my kids will never like the creamy cheese taste (just like their dad, sigh!!!). When my kids told me that they love to eat these blueberry cheesecakes, my eyes half-opened with surprise and my heart was hilariously happy. These bite-size Blueberry Mini Cheesecakes are delicious and they melt in the mouth, the mild tangy blueberry taste has just added another dimension to the cake which also lessens the creamy milky taste. The Oreo crust base is another reason that changes my kids’ mind about cheesecake, Oreo biscuits are always their favorite. 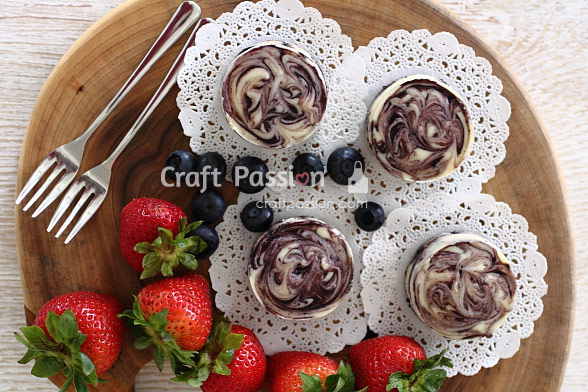 Unlike normal baked cheesecake that has a sunken top, these blueberry mini cheesecakes are flat on the top and the marbleized effect of the blueberry puree has just added a beautiful artwork to the cheesecakes. You may add some fresh blueberries on them or leave them as they are when serving. Best served chilled. 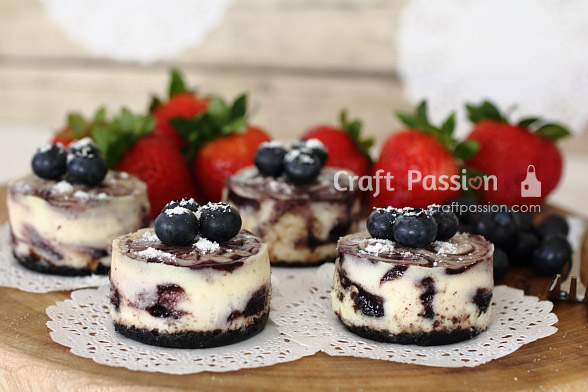 3. Break Oreo biscuits (without the cream) into smaller pieces and put into a food processor, pulse Oreo until they become crumbs. Mix melted butter until moistened. Spoon in Oreo mixture evenly (about 1 to 1 1/2 teaspoon each cup) and press firmly into the mini cheesecake pans. Refrigerate them.

5. In a large bowl, mix cream cheese with sugar until smooth. Blend in milk, mix in eggs one at a time, mixing just enough to incorporate. Mix in sour cream, vanilla, and flour until smooth.

7. Bake in preheated oven for 30 minutes with steam bath. Turn oven off, and let the cake cool in the half-opened door for 1 hour. Chill in refrigerator until serving.

1. Place a pan of hot water in the oven (bottom tray) before baking to make the steam bath. Take out the steam bath pan immediately after turning off the oven to prevent over condensation in the cake. 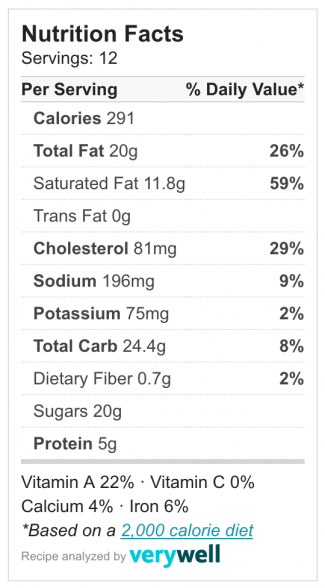 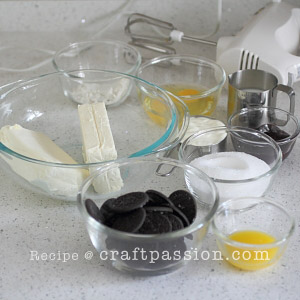 Prepared all the ingredients and tools needed. 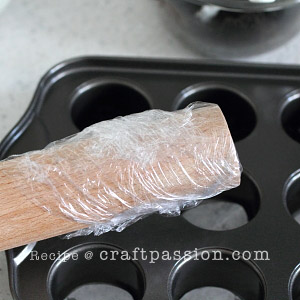 Wrap your rolling pin or any flat-end rod that can go into the mini cheesecake pan with cling film. 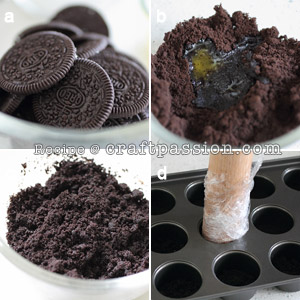 Prepare the Oreo crumbs as the base of the mini cheesecake. Scoop the crumbs into the greased and lined pans, about 1 to 1 1/2 teaspoon each. Press them firmly into the base with the wrapped rod.
Refrigerate them until you have prepared the cheesecake batter. 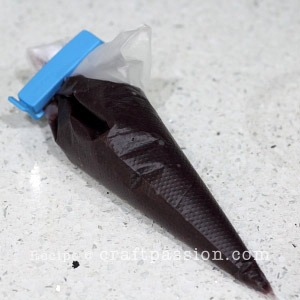 Fill the blueberry puree into the small piping bag. Set aside. 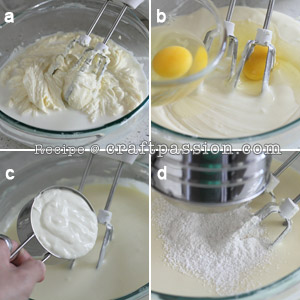 Prepare the cheesecake batter as written in the method (5) above. 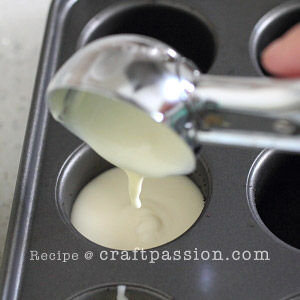 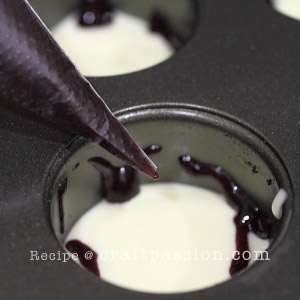 Pipe in some blueberry puree to the side of the pan. If you want more blueberry, you may add some to the center. 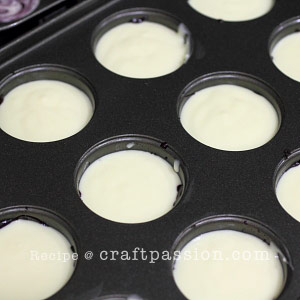 Continue to fill the cups with more cheesecake batter. 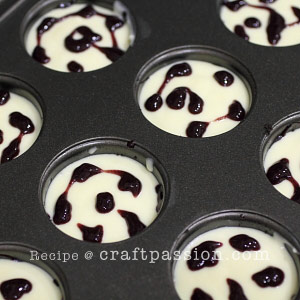 Add some more blueberry puree to the top. 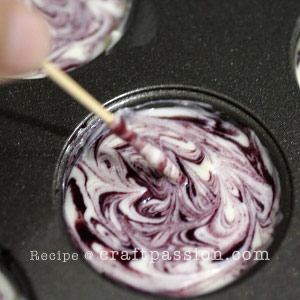 Use a toothpick to swirl around the batter to create a marble effect on the cheesecake. 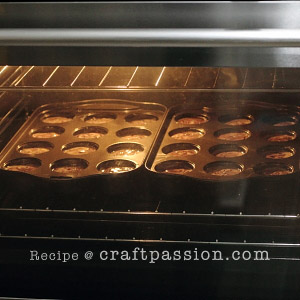 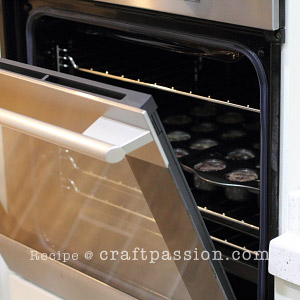 Switch off the oven after 30 minutes and let the cheesecake cool inside the oven for another 1 hour with the door half-open. 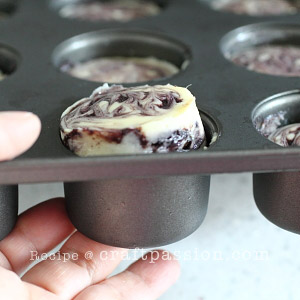 Release the cheesecake from the pan by simply pushing it out from the bottom, remove the bottom plate and lining.
Refrigerate the cheesecake until serving.
You may also keep the cakes in the pan while refrigerating until they are ready to be served. 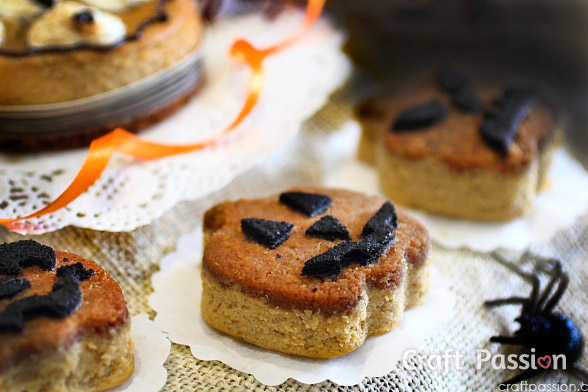 From all the Halloween posts I have done, I think you have seen a pattern here… I am riding a hobbyhorse of pumpkin every October!!! This Pumpkin Cheesecake is not
Continue Reading 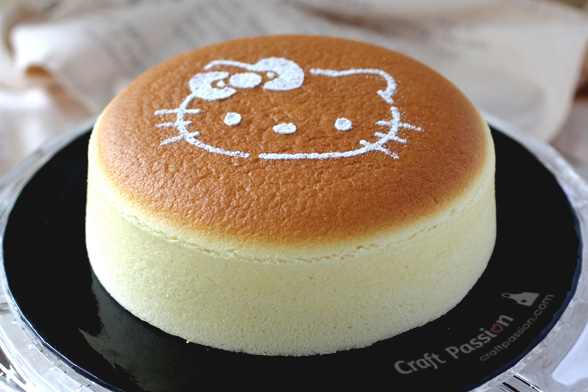 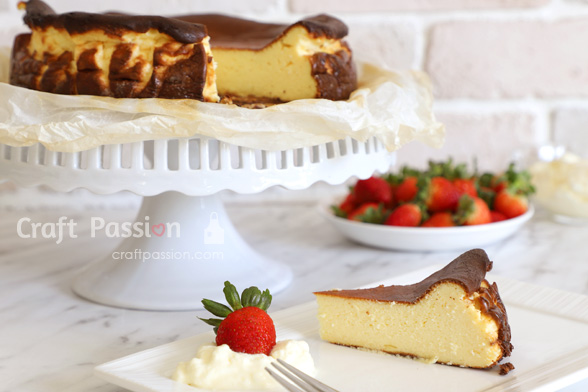 This is a Burnt Cheesecake, not a disastrously failed Japanese cheesecake! LOL… It is actually an intentionally “BURNT” to make caramelized cheesecake, made popular in Basque County of Spain, a
Continue Reading

It has been a while since my last post at the recipe section, I am back with another baking recipe of the famous fluffy Japanese Cheesecake, but this time, I
Continue Reading 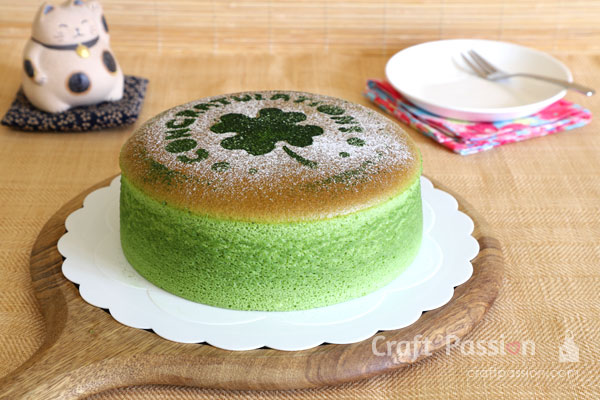 All of a sudden, I craved for matcha Japanese Cheesecake; full of matcha flavored,  fluffy, cottony soft, fine texture, light & heavenly cheesecake. Without thinking much, I bake one by
Continue Reading 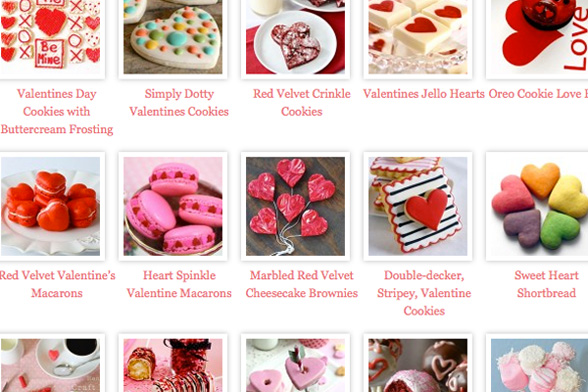