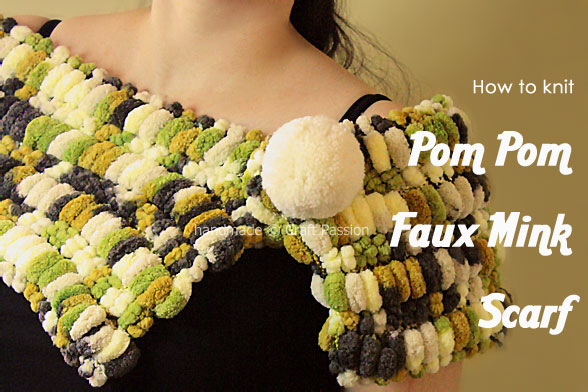 Only one of you will be lucky enough to win this Pom-Pom Mink Scarf in my giveaway draw which has closed on 18 Oct ’09 at 9pm (Malaysian time), so…. just in case you didn’t win, I made this tutorial for those who wish to knit one for yourself or as a Christmas gift for friends this coming winter 🙂 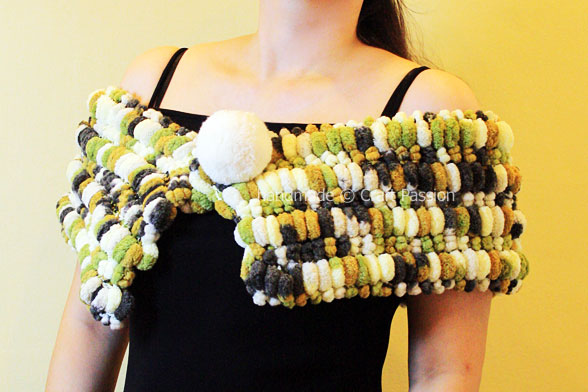 If you know how to knit, completing this pom-pom mink scarf is pretty easy. Most of you experienced knitters out there, I am sure once you look at the picture of the giveaway draw, you already knew how to knit it, right? Even a beginner can try to do this as you won’t see the tension of your knit work since the stitches are hidden by the pom-pom. All you need to know is “knit” to make Garter stitches for the scarf. Garter stitch means you knit on both side, no purl is required. 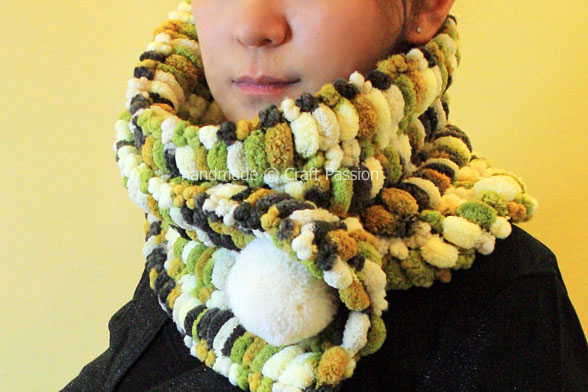 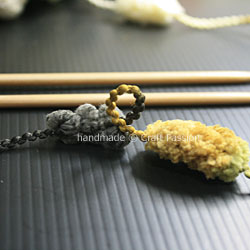 Make a loop and insert the knitting needle into the loop. Make sure that the tail end is behind the start of the yarn as shown in the picture. 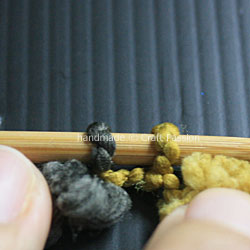 Skip the big pom-pom and cast-on 2 loops again with the straight yarn, do it again and again until you have 16 loops to begin on the first row. You will have 4 big pom-poms and 3 small pom-poms in between the 16 loops as shown. 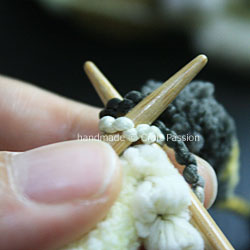 Cross-over the yarn (black color) counter-clockwise with the tail resting between the “X” of the 2 needles. 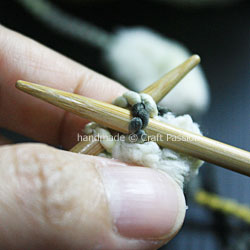 Gently pull back the right needle out from the loop, bringing together the yarn and bring it in front of the left needle. 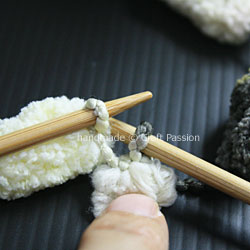 Draw the first stitch out from the left needle and you have completed the first knit.
Note: You will have a small pom-pom at the side of your scarf.

Continue knitting for the rest of the 15 loops while transferring all the loops from left to right needle to complete the second row. Remember, there are only 2 stitches in between the pom-pom and only knit the straight yarn and not the pom-pom.
Now you can see much clearer, at each side of a row, there will be an additional small pom-pom. 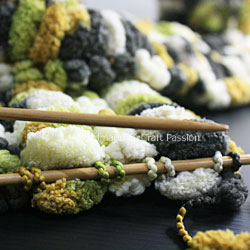 Switch side to your needles and you should be holding the knitted pom-pom on your left and an empty needle on your right and start to knit the third row.
Knit…. knit…. knit…. clock ticking…. tick tock tick tock… after 2 hours, the scarf was half-way finished, with my speed and skill.

Almost finished, just cast off by knitting 2 stitches together (K2tog). Hide both yarns ends among the pom-pom. DONE! You can add a big pompom or a big brooch as a fastener for the Pom Pom Mink Scarf and wear it just like the photos shown above.
Tutorial for making a pom-pom. 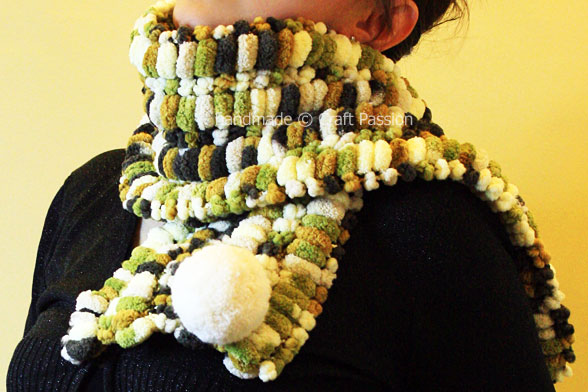 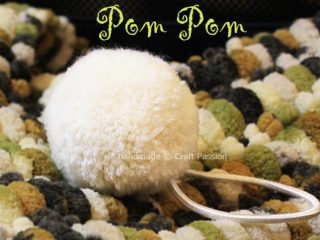 I am very new to knitting (I learned last week). I'm on holiday, am determined and for years said I couldn't do this knitting thing. Well now I can!... almost. Kitting is very addictive!

My problem. My Ma had this pretty wool, she never used it so I snatched it up (so I have it with no wrapper with handy instructions on it). After watching a few you tube vids, inventing my own way of casting on and knitting for a day, I have this gorgeous scarf that is impossible to bind off!

My wool is a non standard size, I think, (I can only do one stitch between each pom pom). To describe the poms are seemingly half the size of the Rico brand poms. The string between wraps around (the 3.75 mm needles I am using) only one full circle.

Using the usually cast off method of slipping the last stitch over the new stitch I am left with a pleasing crotchet effect - but the end is all bunched up. It doesn't have the stretch of the start side.

As I am working with 9 stitches facing up k2tog leaves one behind and (as I understand it) tapers the rows down to a point. I want it to look the same as the flat start.

I've tried casting off (over half a day and multiple different ways). I am writing a note to every vid and help site is search of help as my last resort is to strip the poms off the string and cast off that way (it just doesn't seem to be the elegant solution to me - and I've only been doing this a week!) There just has to be a cleaver solution to this prob, I'm too novice to figure it out on my own.

I would be grateful for any advice given.

Love this pom pom faux mink scarf knitting tutorial! I bought this great pom pom yarn and was looking for a unique way to knit and show it off - this tutorial had it all: innovative and informative.

Glad & happy to know this, thanks! Do come back for other tutorials :)

Just saw above instruction for tying ends together when adding another skein.sorry for that!

I need to add another ball of pom pom yarn... how is that done. I was going to tie together.

Thanks for the instructions on how to knit with this yarn. I've finished my scarf but can't for the life of me figure out how to bind off. I have three sets of two stitches on my needle. If I knit two together, I end up with 3 stitches on my needle. If I knit those stitches together, two at a time, the end of my scharf will come to a point and not look like the cast-on end. Can someone please describe the bind off a little more clearly for me. I must be missing something here. Thank you in advance for your help.

Hi Betty, you need to knit 2 together then cast off by bringing the loop over, just like you cast off your stitches in your normal knitting. Hope this help :)