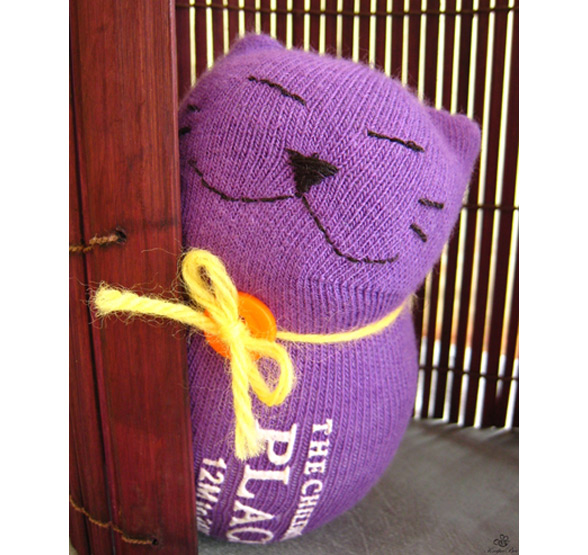 I wanted to try sewing sock plushies since months ago but keep on postponing due to my long craft lists and ideas, until I saw Brenda of KrafteeBee posted her long ear sock cat, Gumbo, I can’t resist for not asking her to guest post in Craft Passion. I want to share with you how to sew sock plushies while I learn from her!!!

Brenda, who is also known as Sweetee Bee in KrafteeBee blog is a working mum with 2 lovely 20 month-old twins, Aiden and Caileigh, twins! TWINS? Yes, TWINS!!! How astonishing that she can handle both of them, yet, work and craft at the same time!!!! She told me she craft while her twins are having their naps. Looks like sock plushies is the perfect sewing craft for some quickie projects during kid’s naptime, moreover, when they wake up, they will have a brand new soft stuffed toy to play with.

Let’s see how to sew this cute little sock kitty, Brenda called her Lenny, after this jump.

When I shared pics of Gumbo and Gummy, I received a pleasant surprise one day…. an offer to be a Guest Post in Craft Passion site!!! I was so thrilled and practically jumped up in the air as it’s a huge compliment to me and all the hard works I had been putting in. Thanks so much for giving me such a great opportunity to share.

I spent a lot of time doing research and perfecting my skills on making sock plushies. It’s quite a new craft that I’ve picked up recently. The more I do, the more I like it. Actually, the journey of sock plushies was quite hilarious. When I made Checkie the sock Bunny, Aidan saw it…. took it…. and ran away with it. He looked so cute holding the bunny and running away from me. When I tried to get it back, he just hangs onto Bunny even tighter.

Then, when I made CoCo the sock monkey, Caileigh took it into her hands and tried to sit Coco down….very gently. After CoCo sits down, she sat next to CoCo and talked to her… how sweet…. my princess!

Since they love it so much, maybe I should make a few more for their birthday. What animals do you think I should make? :p How about sock fish? 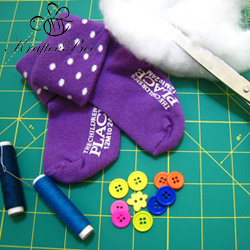 Sock dolls or plushies are getting very popular amongst crafters, it is easy and fun.
Items needed
1. Socks
2. Scissors
3. Polyfill
4. Thread and needle
5. Buttons and yarn for deco 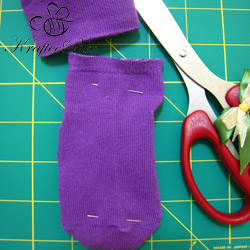 Steps of instructions:
Step 1: First you will need to cut up the sock to the length that you like.  I cut the sock shorter for a short and stout kitty. 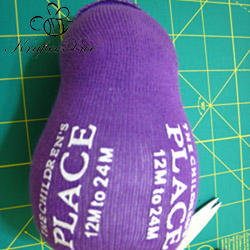 Step 2: Stuff the body and the head of kitty with polyfill. Do ensure that the ball of polyfill for the body is bigger than the head. 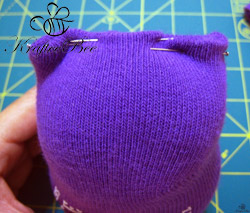 Step 3: Once stuffed, fold the opening inward and pin them down for a smoother and tougher finishing. The raw edge of the cut frays easily. 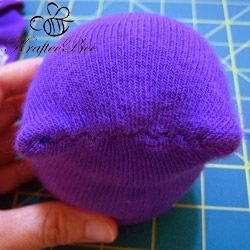 Step 4: With slip stitch, close up the opening and remember to tug the ends a little bit to shape the kitty’s ears. 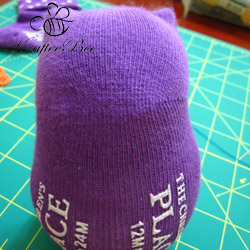 Step 5: Mold the body and head into a nice round shape with hands. Do tug the ears too to make it pointy. 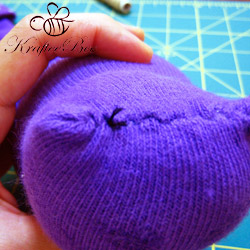 Step 6: To do stitches on kitty’s face, slip the thread in via the opening end. This way, you can hide the stitches nicely. 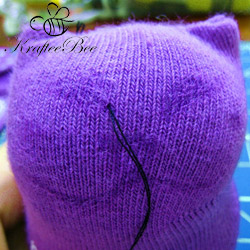 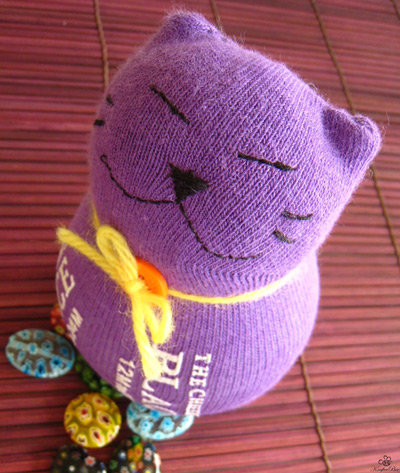 Step 8: Finally, take Lenny out for a walk in the bright sunny afternoon 🙂

As you can see, making sock plushies is not very difficult. Just some imagination and needlework and I hope that you like this.

[…] have made quite a lot of sock tutorials of different sock animals earlier; check out sock monkey, sock kitty, and even sock skeleton for all the fun we can have with stuffed socks. Making BiBi is no different […]

Can you give me any ideas how to stich the face of the kitty? If I do it at the end as in the instructions, the knot will be outside. :(

Panni, tie a knot after you have finish the stitching, insert your needle back to the body at where your knot is, pull the needle so that the thread and the knot get into the body.

This little kitty is so cute and adorable! I love the tutorial..I especially love the color and its eyes! Super cute! I featured this in my blog: http://www.plushiepatterns.com/sock-kitty-plushie-pattern-by-raftee-bee/ Thanks for sharing!

Thanks for the great sock kitty tutorial, I featured it on my blog! :) http://www.colorfulcanary.com/2015/03/14-great-ways-to-recycle-old-socks.html

I spent hours on it and it still looks so horrible. I guess it takes talent to make one. >:(