Have you ever feel that hand tracing a decent amount of applique patterns to the fusible webs such as Steam-A-Seam or Heat’n Bond is something you want to skip? Multiply the time with the number of appliques you need to trace, it is frustrating and making us losing interest to continue with the craft. Here is the tutorial of a quick fusible applique method.

Even for those appliques that are simple, repeating it over and over again is boring and monotonous. Here is the tutorial to show you how to get them done faster with just a few simple steps.

I am sewing a full-size super single blanket, “The Secret Garden“, that was specially designed for my daughter. The 62″ x 88” blanket has lots of appliques. If I wasn’t wrong in counting, there are a total of 360 pieces of them (the photo shown below is only part of the applique I did).

I was slapping my forehead and feel a little regret to be so enthusiastic on the design when I realized how time-consuming it was to trace every single applique by hand.

Well, the project must go on and I need to think of a way to make things go faster before I surrender on it. Throughout the process, I’ve come out with this quick fusible applique method that makes things a lot easier and faster for me.

Get ready all the materials needed for fusible applique.

Peel off one of the paper backings from the fusible web.

Arrange and stick them on the wrong side of the fabric of your choice.

Cut the appliques that have fabric attached to it by following the pattern line.

This is the fusible applique that is ready to be used.
You just need to peel the paper pattern away, stick it on the right side of your project, and apply warm heat to fuse them together.
Remark: in some cases, I find it hard to remove the paper pattern as it adheres too well to the fusible web. I have to use sharp tip tweezers to pick a corner or an edge to separate them.
Tip from Bert in Rice, WA: “Tip: If it’s difficult to remove the paper, use a pin to score it right down the middle.” 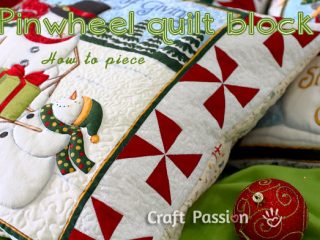 I'm leaving in Quebec and just found your website. Your patterns are so beautiful. Thank you so much for all. Nice day.

I did raw edge applique by machine :)

I love this pattern, is their directions on how to put this quilt together with borders etc. thanks

Hi Margaret, the pattern for the complete quilt is at http://www.craftpassion.com/2013/05/secret-garden-trapunto-quilt-pattern.html enjoy sewing it up.

Still finding your pattern, and still loving it, in 2015! thanks so much for your creativity and generosity! huggahugga,,,