Who is Sam Sock Sheep?

Sam loves to be outdoors with his family on the green pastures. Standing under the big, blue sky surrounded by family and neighbors, with the cool breeze on their faces and sweet-smelling grass under their feet, there truly is no better feeling.

Today, just like every other day, the whole community of sock sheep is outdoors, enjoying the fantastic weather. The little ones are running around, chasing each other in the tall grass while their mummies are sitting down, ba-baaing to each other about their morning activities. The sheep daddies walk in together, some chewing on blades of grass. More sheep appear after drinking fresh from the well.

Yes, almost the whole sheep town is here on this clear, cool day. Looking at all of them so happy, I also wanted some of that cheerfulness in my craft room. So I opened my craft closet and started thinking about making my sock sheep as part of my collection of sock animals. Yes, that’s right – a whole sock sheep family to give my home that same happy, fuzzy feeling.

Sam and his flock have arrived at my house to spend the day in the sun. Here are two sheep poses for you to sew: standing up (Standing Sam) and stretched down (Relaxing Sam).

In order for you to make your own stuffed sheep out of socks, I’ve decided to share them with you. Remember, it’s never too late to send a love gift to your loved ones, even if it’s too late to sew it for Valentine’s. When you have love in your heart and people to share it with, every day is Valentine’s Day, as the saying goes.

Let’s get started on our gifts right away!

To begin, you will need some sock sewing experience to sew sock sheep, but if you are a beginner, just proceed as carefully as you can and remember, Sam the Sock Sheep doesn’t mind if you don’t get it perfect the first time. The joy comes from sewing and gifting.

Seam Allowance: give yourself approximately 1/8” or 1/4”

MORE DETAILS ON HOW TO SEW 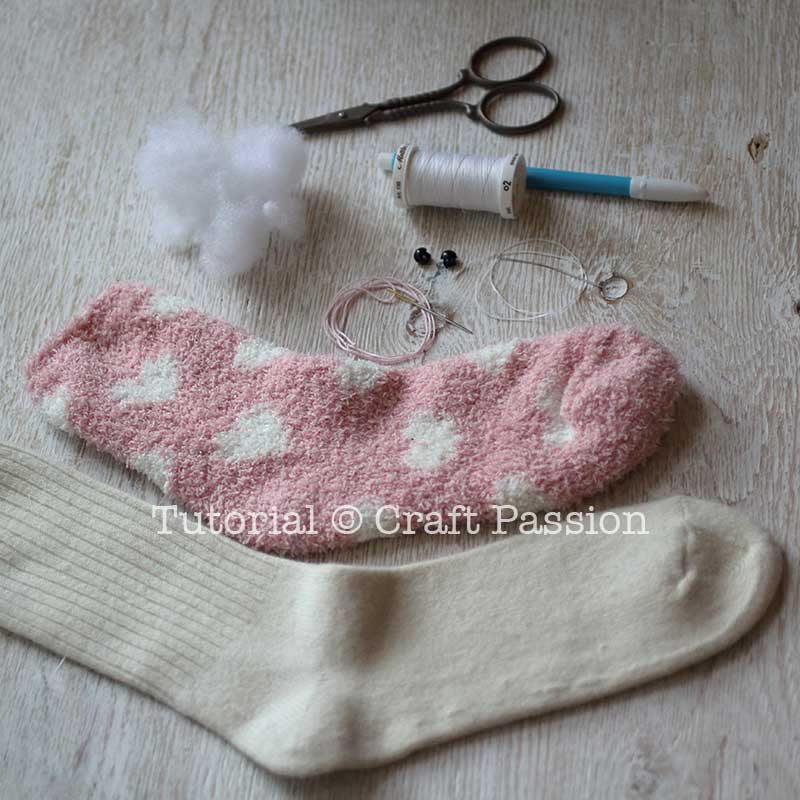 Get your tools and materials ready.

The poly-stuffing material display in the picture is only a sample, you will need more than this. 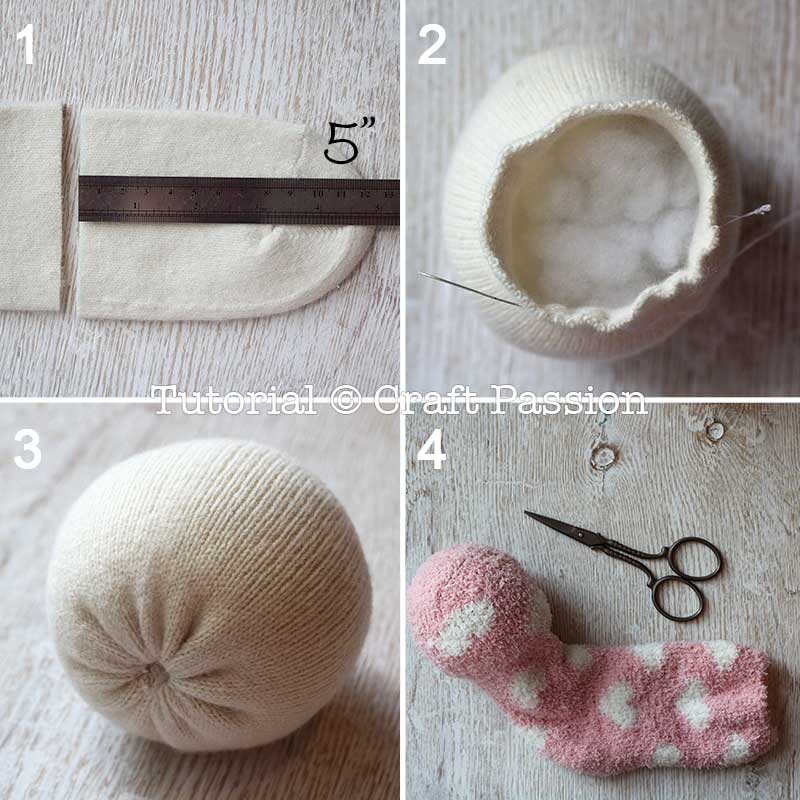 2. Stuff with poly-stuffing material until it is about the size of a fist.

3. Sew running stitch 1/4" from the edge, pull to close the opening. Push the raw edges into the head. It is alright if the gap is not completely closed. 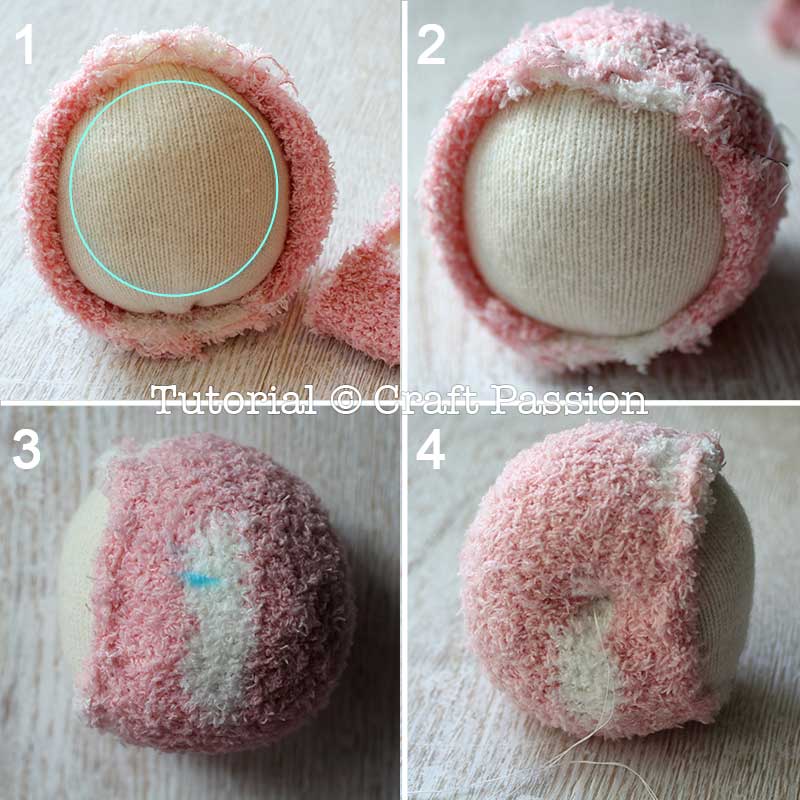 1. Draft a circle slightly smaller than the beige sock ball, as shown.

2. Fold the raw edge up at the circle line and stitch to the beige sock ball. Make sure the raw edge is caught in the thread so that it won’t stray out from the head.

4. Use 4 strands of thread, make a few stitches across the head to the opposite and pull to create the dent. The head will turn into an oval shape.

Details On The Face 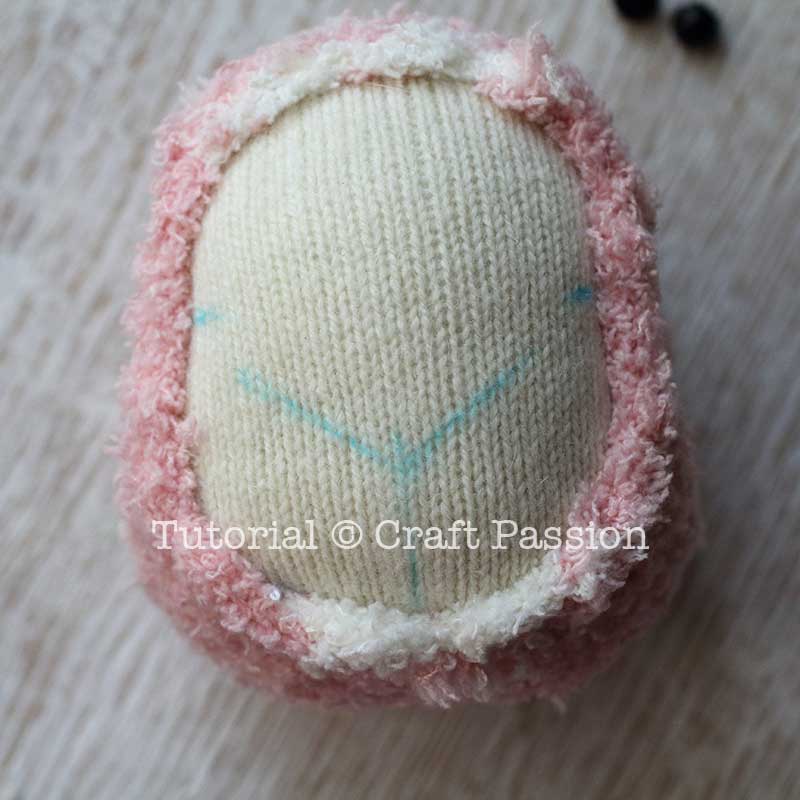 Mark the eye positions, it is at the same level as the ear indentation. Draft the nose with the erasable marker too; first, draw a vertical line at the center of the face, 1" from the pink sock. Then draw 2 slant lines extended from the eye to create a V shape. 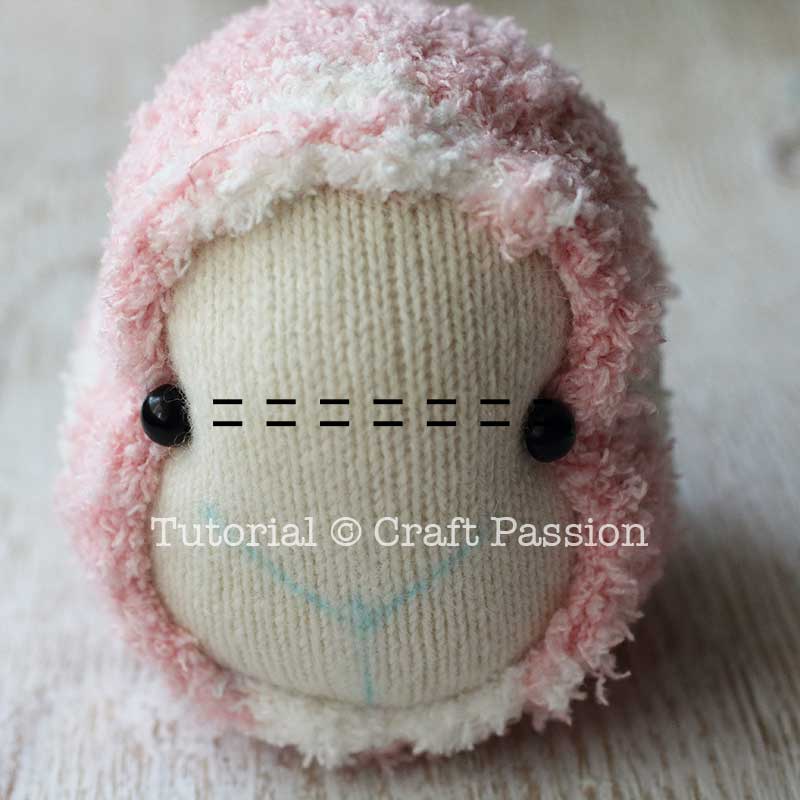 Stitch the button eyes on the respective marking.

First, you sew to attach 1 eye, knot. Insert the needle back to the face and come out from another eye marking, pull to sunken the first eye and indent the second eye placement, knot.

Sew the second eye at the indentation, knot then bring the needle out from the first eye, knot again. 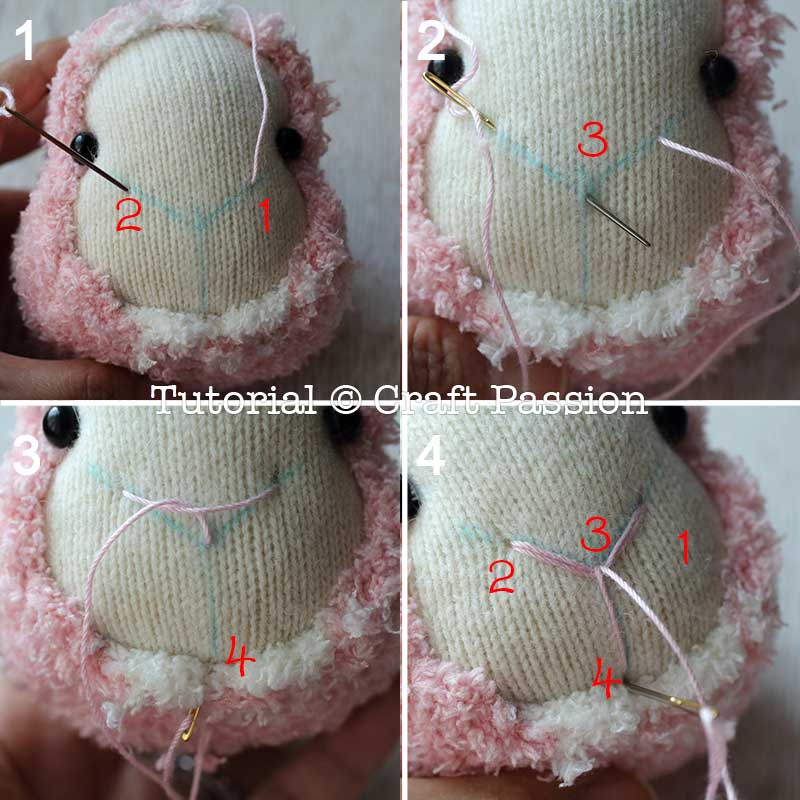 1. Sew nose with crochet lace thread or embroidery floss (use all 6 strands). Tie the thread at the bottom of the head. Insert the needle into the head come out from point 1 and go in at point 2.

3. Place the horizontal thread under point 3, the needle goes in at point 4 and come out at the starting point. Pull slightly to create a V-shape nose.

4. Repeat the process again if you wish to make a more defined nose. 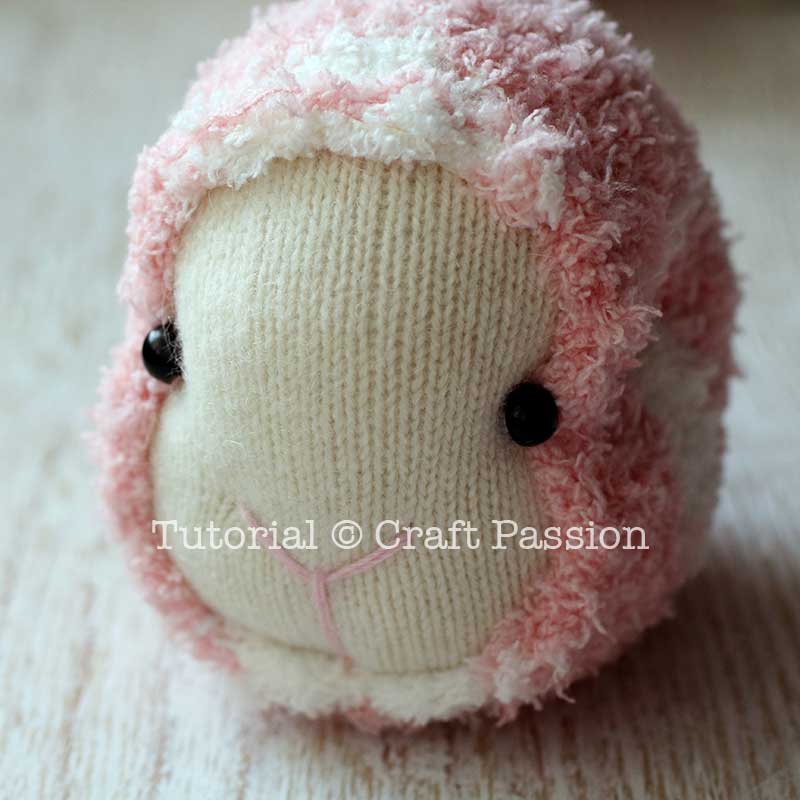 This is how it looks like after the eyes and the nose are done.

Set the head aside. 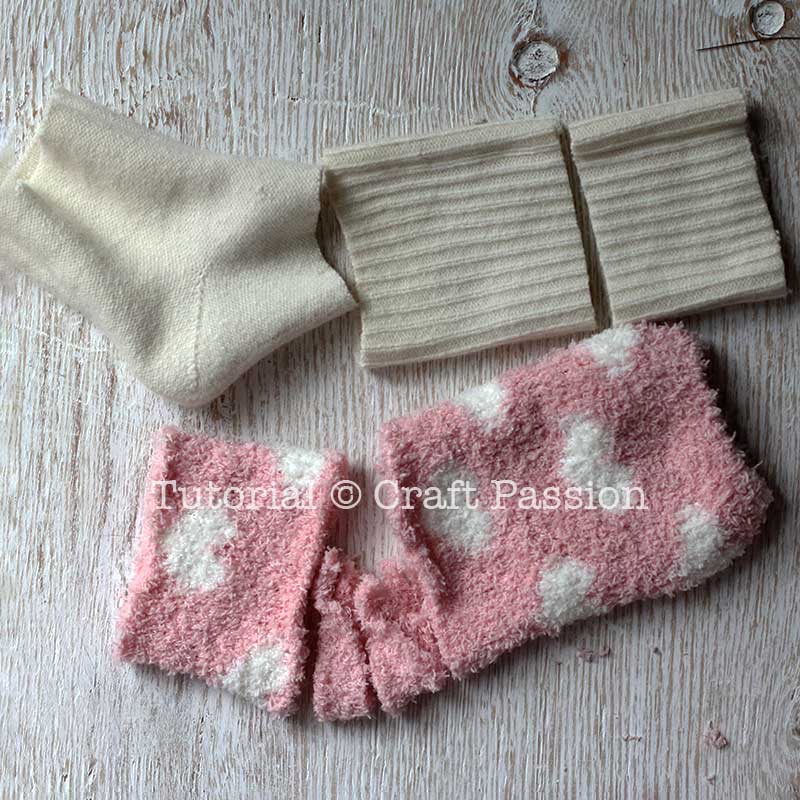 Cut the socks as shown in the picture. 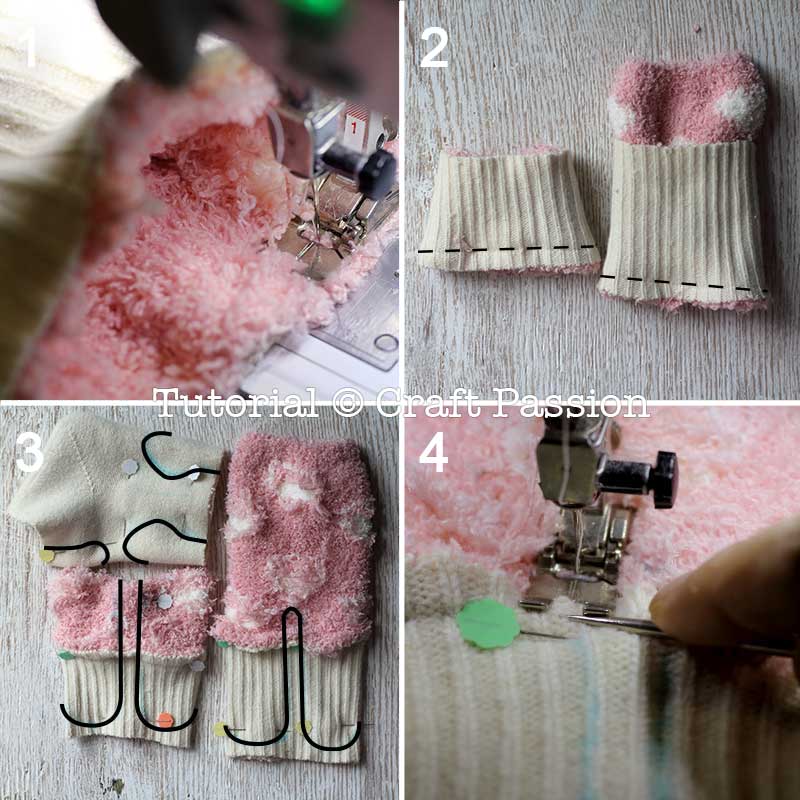 1 & 2. With right side facing each other and raw edge aligned together, sew the beige and microfiber sock together for the legs and arms parts respectively.

3. Flatten the arm and leg parts with the wrong side out, align the seam lines of both layers and pin them together. Draw the outline for the legs, arms, ears, and tails on the sock. Click the link to get a larger picture of the sewing pattern.

4. Sew along the drawn lines. The join is thick to sew, sew slowly and carefully, use an awl to press the microfiber down to reduce the thickness so that it is easier for the presser foot to get over. 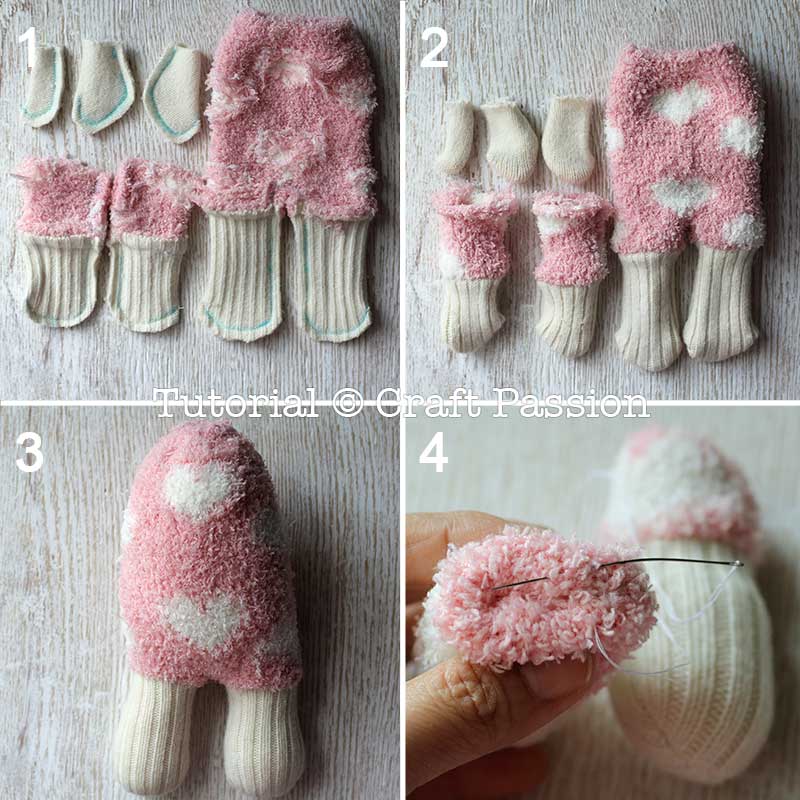 2. Turn all pieces right side out.

3. Stuff body until it is firmed at the leg part and gradually reduce the firmness towards to the top. Sew running stitch to close the top.

4. Stuff arms until the beige part is firmed, add a little poly-stuffing material to the pink part. Sew to close the arms. Stuff the tail firmly and sew to close the opening. Set aside. 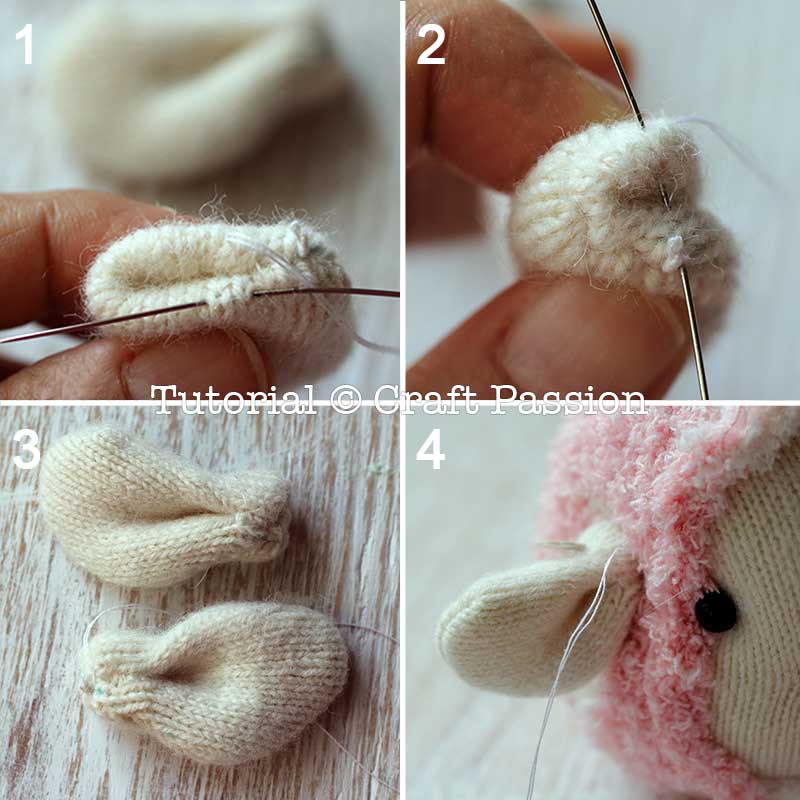 1. Stuff very small amount of poly-stuffing material to the ears, Sew to close the opening.

2. Fold the ears to half and sew along the base and a bit on the side.

4. Place the ears to the indentation position, with the ears pointing down, pin and sew around. Repeat the same to the other ears. Eyeballing the position and the pointing direction of the ears so that they come out to be identical. 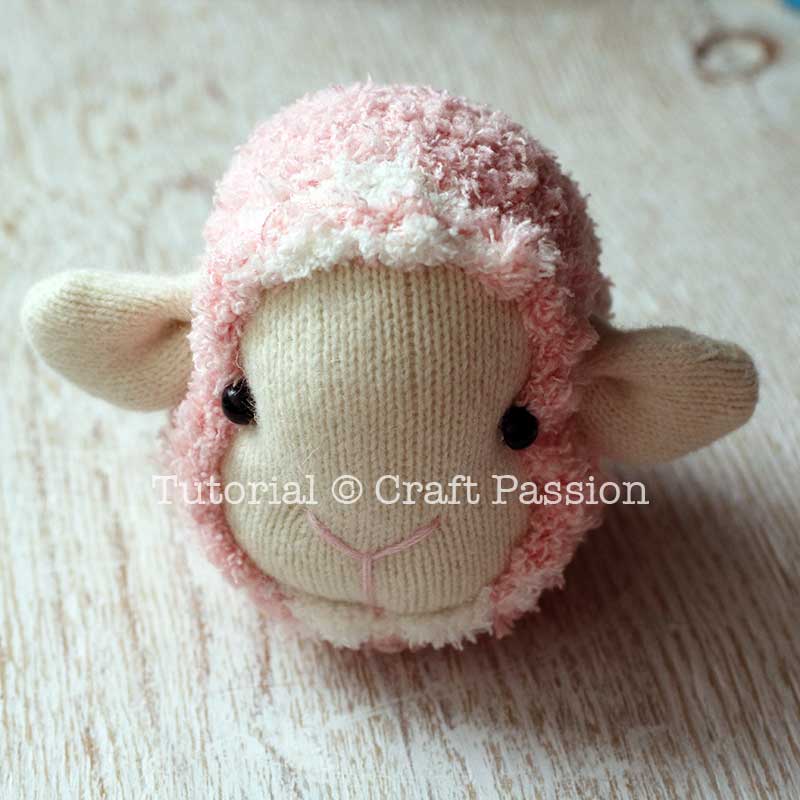 A completed sheep head with ears attached to it. 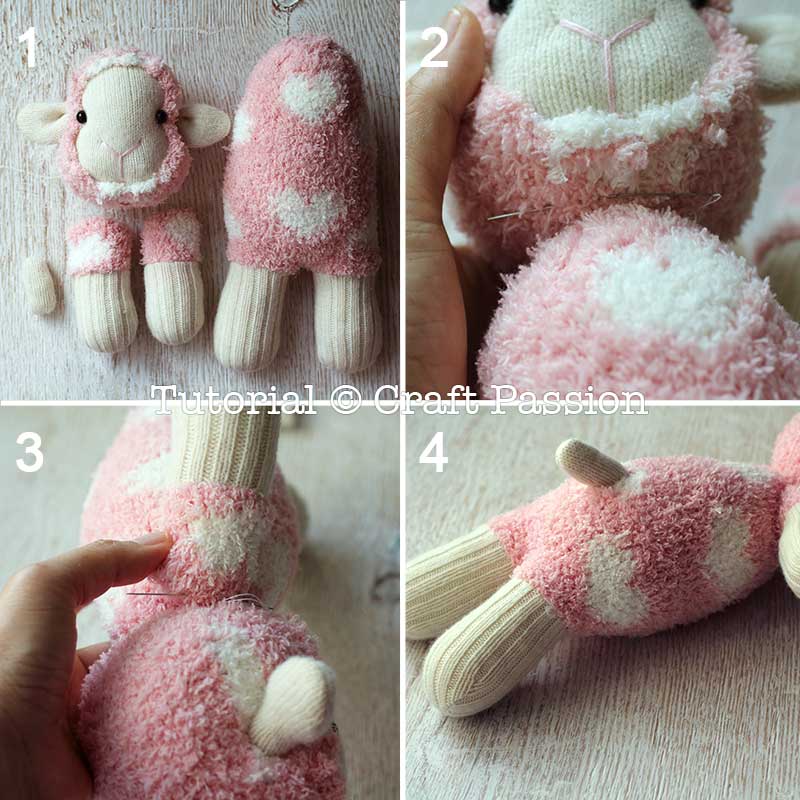 Sew the head to the body, then arms to the position between the head and body.

Finally the tail at the back of the body. 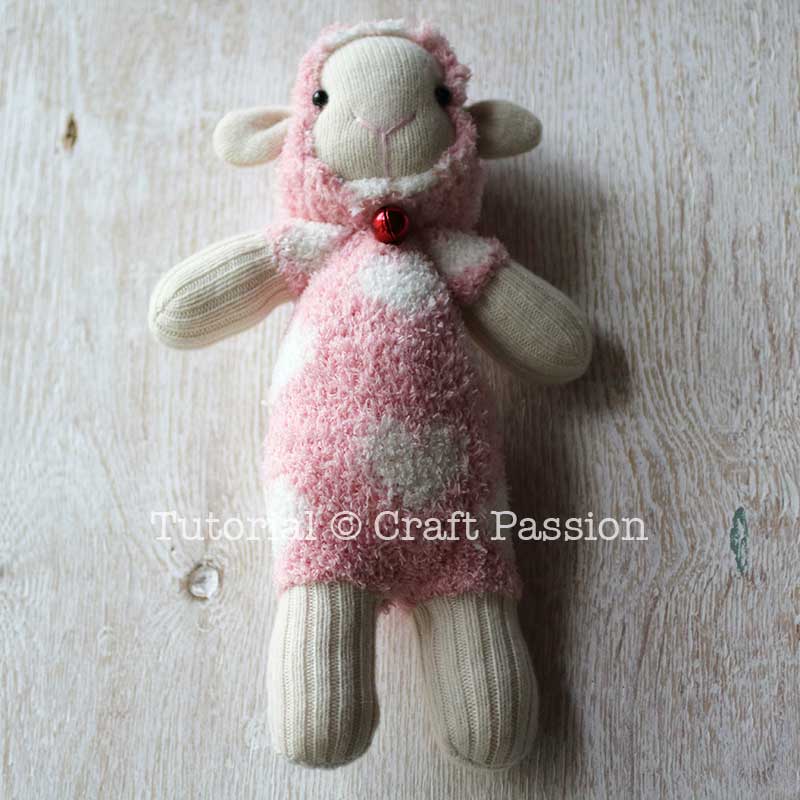 Tie a jingle bell to the neck of the sock sheep to complete a cute and adorable soft toy sheep. 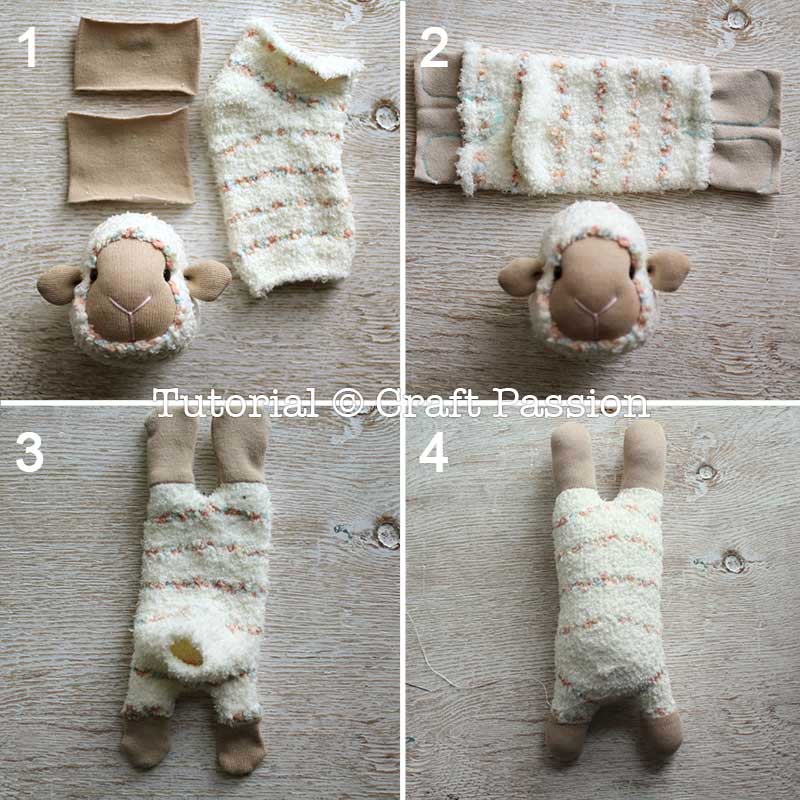 You need the same tools and do the same things as making sock sheep Standing Sam, except you you don’t need to split for arms and legs on the microfiber sock.

1. Follow the instructions of Standing Sam, except for the microfiber sock of the body. Don’t cut to split it. Instead, cut a small opening at the heel because you need it to turn him inside out later.
2. Join the plain sock to the microfiber sock as shown. Align and pin the layers together, then draw and sew the stay-down body.
3 & 4. Turn the sock right side out from the small opening at the heel (you cut this earlier at 1.) and stuff. Sew up to close the opening. 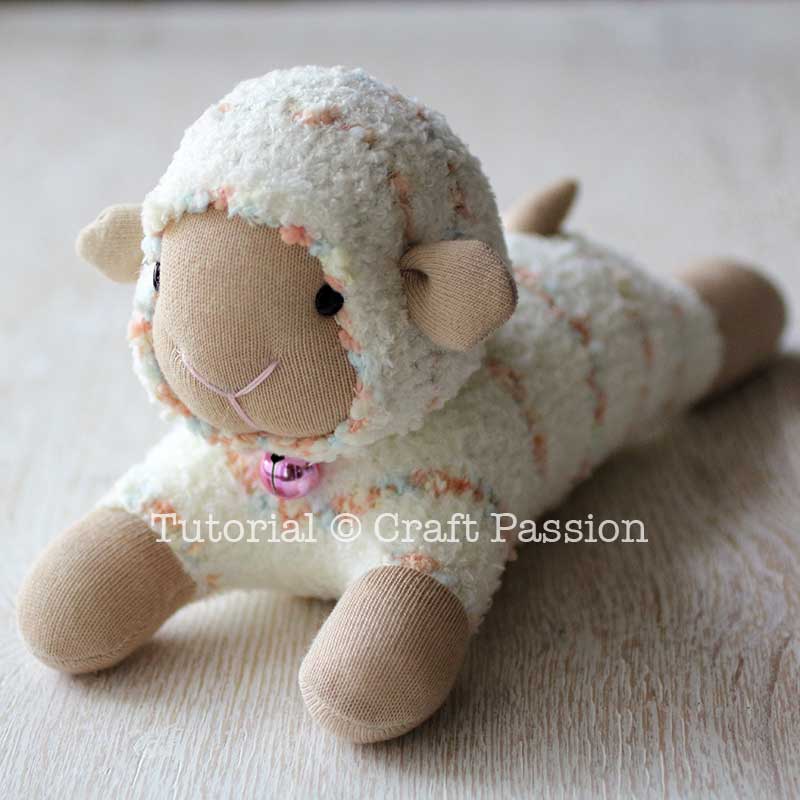 Now, you have the body. Take the head (instructions found under Standing Sam) and sew it on. To complete the look, tie a little jingle bell to his neck. 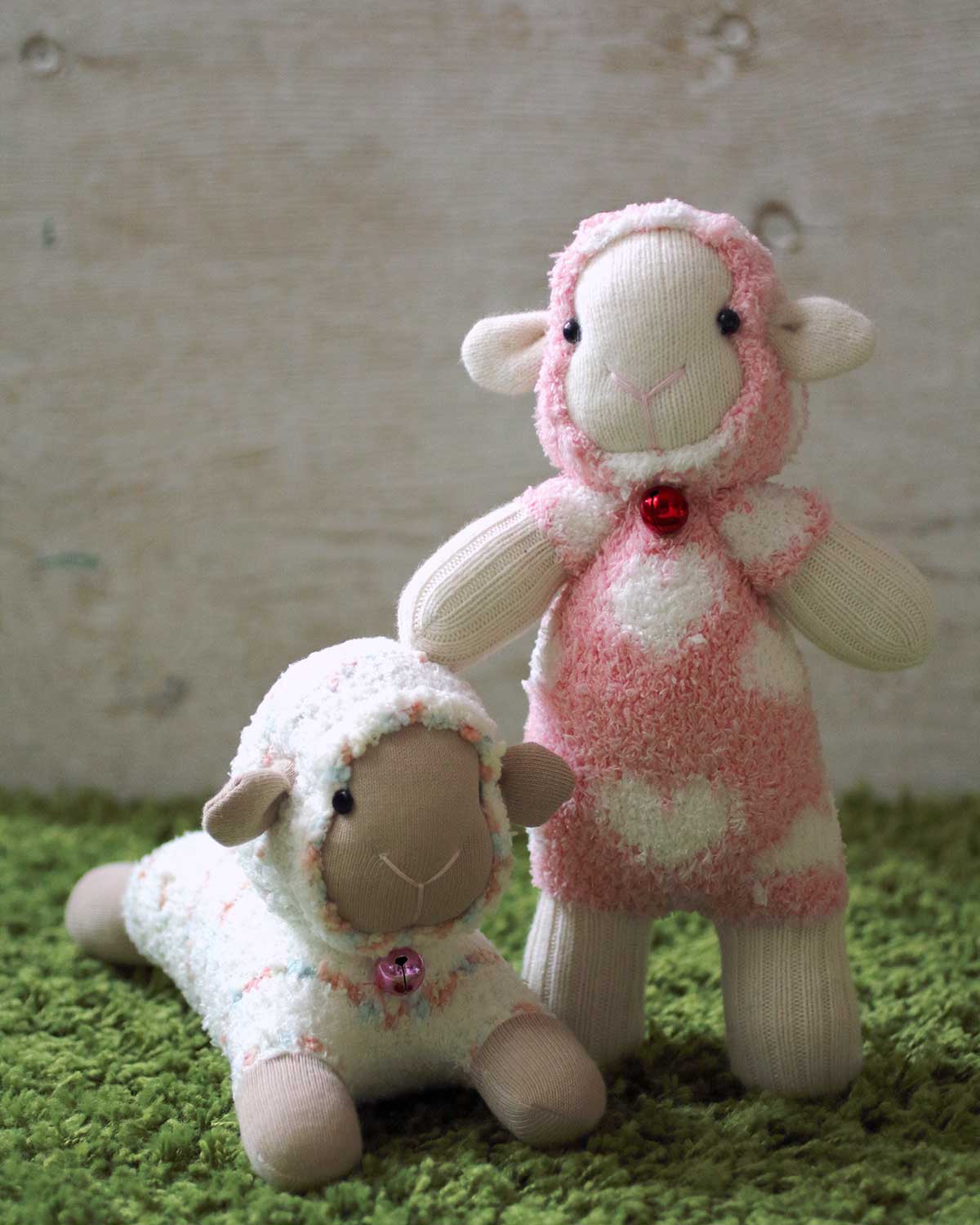 And here you go. 2 sock sheep poses for you to choose from, Standing Sam and Relaxing Sam.

The joy is in the crafting so make a whole sock sheep family from different sock colours and patterns, and mix and match them, so Sam and family can go baa-ing in the world. The more, the merrier!

I hope to see your version of SAM Sock Sheep soon. 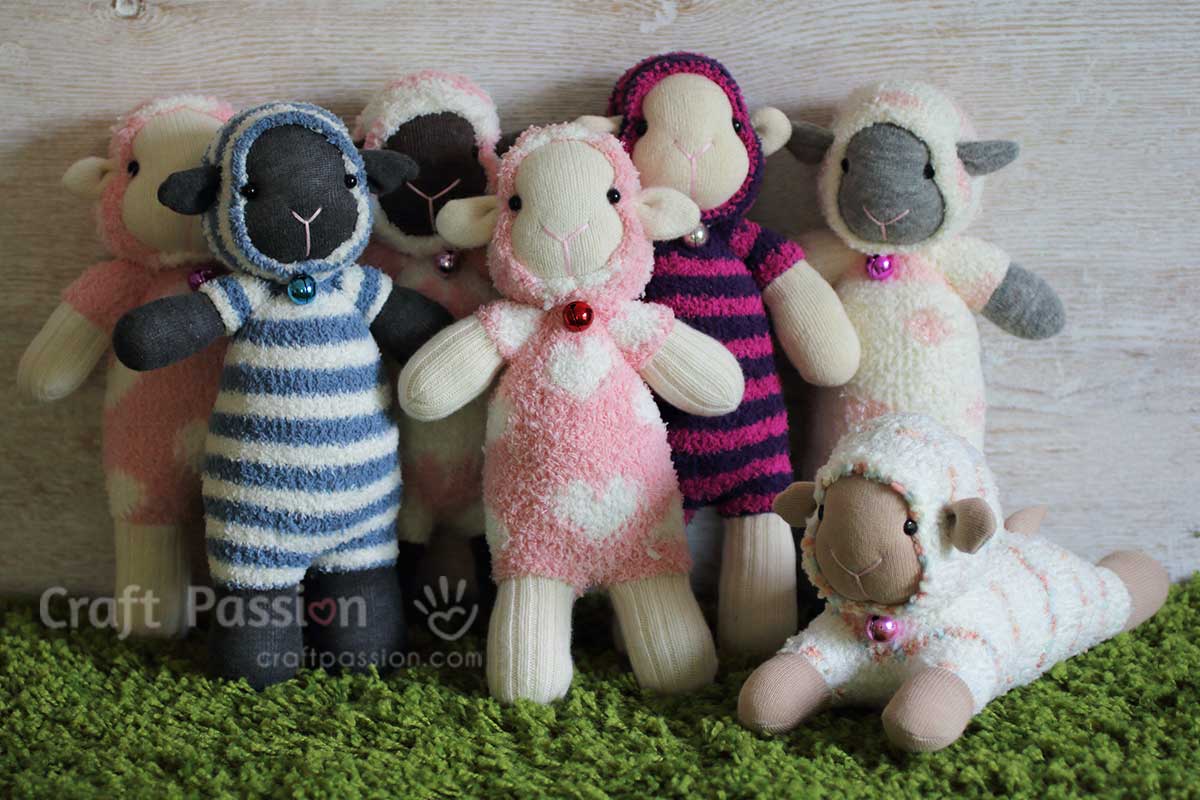 Socks will be stretched after they are stuffed so thick socks that are close-knit make better quality sock sheep toys.

Can you recommend sock bands for the head arms and legs parts for the beige or white. I have looked much for socks for dolls. I want a good quality brand to make them with. thank you. I did see your other post on brands. Just wondering if you have an update. Thank you Jane

Tried it for a sample. It was for a 3 yr. and her 13 yr old sister grabbed it right away. Now I'll be making the 13 yr old one of her own, and her brother a penguin. I have a photo of it, but don't see an attachment button or link to show mine.

Wow, it’s look so cute, your hand so ingenious

I love your site and very very much appreciate your kindness in sharing your wonderful creations. I truly cannot thank you enough. Blessings Penny S

[…] Drake the Sock Dragon is another interesting sewing craft to try. If you’ve tried the others like Sam the Sock Sheep and Marcho the Sock Monkey, you won’t find this one too […]

[…] is a cousin to Sam, the sock sheep (you can find the free sewing pattern & tutorial here). Just like Sam, Sunnia is just as cute and cuddly and brightens up the room no matter where he […]