It’s turkey time! Yes, with Thanksgiving coming up really soon, Mr. Gobble, the sock turkey stuffed animal, says hello to Craft Passion fans, followers, readers, and visitors. This is the time of the year when the turkey theme is literally everywhere, including on social media.

I want to join everyone in decorating your surroundings with a turkey idea, so I have a free turkey sewing pattern here to share with you. I hope this can help you to sew your very own DIY turkey stuffed animal. It also makes for a cool fall gift idea. Need to know where to buy the socks and materials? Everything, including the free sewing pattern (in PDF), can be found in the instruction section.

that’s how Sock Turkey Mr Gobble got his name…

Mr. Gobble the sock turkey stands at 10” tall and is a cool guy who struts around confidently on his two skinny feet. His head bobs as he walks, bobbity-bob, bobbity-bob, making him look like a comical school principal.

He looks stern and unfriendly, but in reality, Mr. Gobble is a happy-go-lucky turkey who likes to get to know everyone in his neighborhood.

He often surprises everyone with his loud cackle of laughter at a joke he thinks is funny. It’s so loud that the little chicks nearby sometimes run for cover. When that happens, the mother hens give Mr. Gobble a frown and shake their heads at him.

Just because he is such a friendly man, they’re never angry with him for long, and soon, the chicks come out and play around him like normal.

Mr. Gobble isn’t always walking around the coop, though. On his lazy days, he likes to sit down in his favorite corner, pecking on some corn. He can actually do that for hours on end, especially on Sunday afternoons when most of the community is snoozing and it is quiet.

The coop community often has visitors, and they include other turkeys from over the hills, so Mr. Gobble the sock turkey is never lonely.

Of all the days in the year, his birthday is always the most fun – he is so well-loved all over that everyone gathers around him to sing him his birthday song and then spend the day with him.

Sewing this sock turkey toy can be a load of fun, especially if you have a sewing partner to do it with.

Even if you have never sewn any sock animals before, you can always learn how to sew one, and Mr. Gobble the sock turkey is a fun one to do as a Thanksgiving gift idea.

Turkey is also a popular autumn harvest symbol, so make one sock turkey (or three!) and include them in your gift basket to the family.

Mr. Gobble the sock turkey makes a great plushie because, with some support on his back, he can actually stand on his own.

The legs are filled with densely rolled-up batting, but you can always add some wire for better support. If you do, make sure the wire is properly sealed up, so it doesn’t stick out from the sock later.

You can also make Mr. Gobble sit comfortably. All he needs is a good prop, and he will be sitting nicely down.

This sock turkey stuffed animal has domed button eyes, but you can also use felt.

Felt can also be used for the white of the eyes and the snood (the wobbly skin above his beak).

I upcycled the unused elastic ribbing of the socks used to make Mr Gobble – instead of throwing them away, I used them to make his wattle, the flapping chin.

I also included a free turkey sewing pattern for the top hat (also made from felt) of the sock turkey.

And have you seen Mr. Gobble’s colorful tail? It’s made from a pair of toe socks! Yes, colorful rainbow-striped toe socks are perfect for the sock turkey. Look at Mr. Gobble, he looks so happy and proud to boppity-bob around with his colorful tail.

Not all of the toe socks were used on his tail, some were also used to make the legs and beak. Mr. Gobble the sock turkey, has big feet so the wider base helps him stand more steadily. They’re similar to Tweety Bird’s except for one thing; Tweety has got two toes while Mr. Gobble has got three!

Do you know why this DIY turkey stuffed animal makes a great gift idea? That’s because you can actually make a personal message on him.

For Mr. Gobble, you can use an iron-on decal (which is what I used, cut from Brother’s ScanNCut machine). Mine says “Happy Autumn” but you can always write other messages such as “I Luv U”, “Happy Family”, “Happy Thanksgiving”, or even someone’s name.

Another way you can personalize your sock turkey toy is to hang a small card around his neck. And you can use Mr. Gobble and a bunch of his turkey friends as table placement cardholders, which can double up as souvenirs during your Thanksgiving dinner party.

Share this sock turkey sewing pattern with a sewing friend. You can both enjoy sewing him together!

Ta-daaa! Mr. Gobble is now ready to welcome the autumn season and Thanksgiving into your home. If you’ve tried this, show me your sock turkeys. I can’t wait to see how they look! 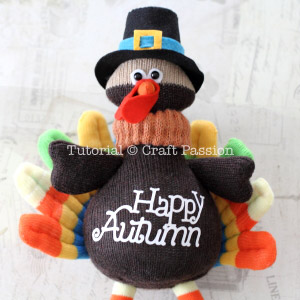 Sock Quality: Socks will be stretched after they are stuffed so thick socks that are close-knit make better quality sock turkey toys.
Seam Allowance: give yourself approximately 1/8” or 1/4” (you need bigger seam allowance for loose-knit and thinner sock materials because they can be ripped off easily)
Tip: always massage the stuffing to loosen out lumps. Long tubular parts should be rolled with both hands so any lumps will be smooth, and help to make the parts longer and firmer.

Get the full article at https://www.craftpassion.com/sock-turkey-sew-pattern/

Can I make this without toe socks? I’m making a present and can’t get them to deliver in time

The toe sock is a great material for the tail. If you can't find a toe sock, you can always modify the pattern by creating your own turkey tail.

Wow Nice sew doll project.. can you make this project with video ?