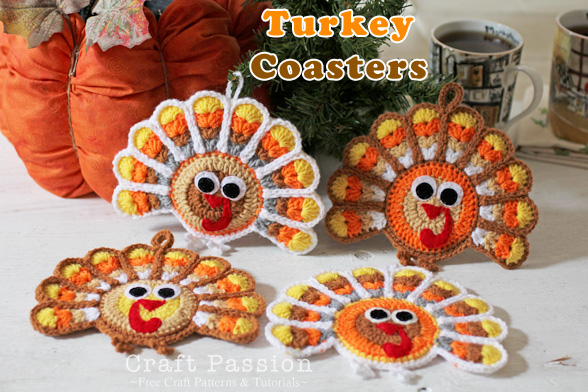 How can one think of Thanksgiving without thinking of turkey!!! Here is the crochet pattern to make turkey coasters or hang them up as ornaments and decorations. Crochet some to celebrate your Thanksgiving with. 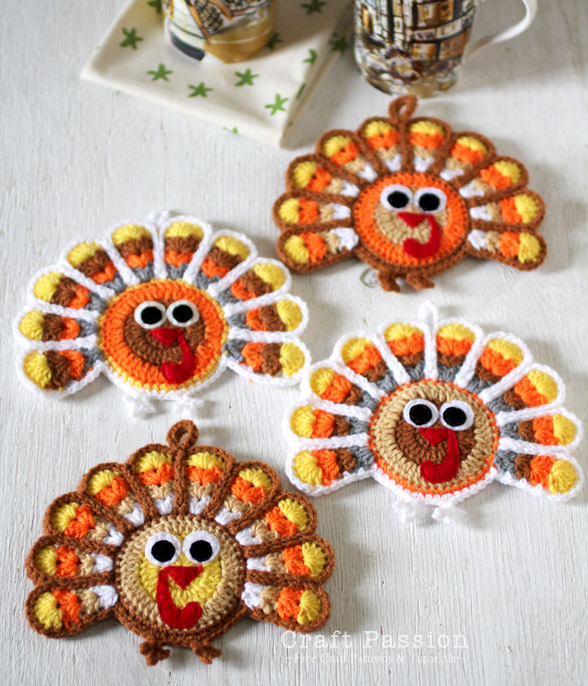 I was inspired by a flower potholder found in Pinterest to come up with this turkey coaster crochet pattern. Using some fall-themed color yarns to crochet the base of the turkey, then outline it to give it a magical touch.

The outlining and detailing on the tails really make the difference and brighten-up the whole crochet piece. If you wish to turn the turkey to peacock, just use change the yarn colors to green, light blue, dark blue, black and brown. 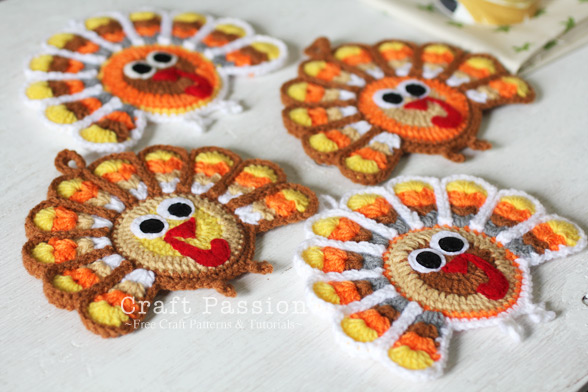 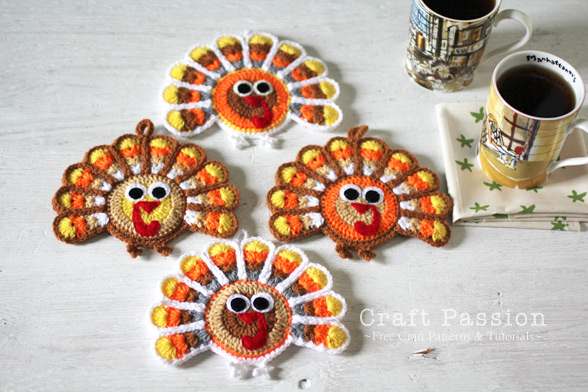 Here is the crochet pattern to make turkey coasters or hang them up as ornaments and decorations. Crochet some to celebrate your Thanksgiving with.

Gauge: not important as long as the yarn label said it is suitable for 2.5mm to 3.5mm hook.

Work on right side only, unless stated otherwise.

sl knot on hook to begin.

When making the tail, you can either follow the front pattern by working on the right side only, that is fo at every rnd and start at the first ch1 space of the previous rnd.

Turn your piece to the other side to work without having to fo at each rnd. Make 2 to 3 slst at the beginning of each rnd to get to the ch1 space before beginning the first ch3 for the new rnd. Don't fo and continue with the next step by joining the front and back pieces up.

Hook Loop: Make a loop at the middle of the tail with ch 10 and slst to the last sc.

Weave in all ends to neaten both front and back pieces.

(Sew facial assemblies on the front before joining the front and back piece. Detail on sewing, please read further down.)

The tail outlining and detailing are made while joining both front and back pieces. All stitches must go through both pieces for joining up.

Place the front piece on top of the back piece, with the wrong side facing each other. Line up edges.

The side edge of the tail: *1sc (at the corner to the tail and go through both layers), ch 1, repeat * until you reach the body.

The side edge of the tail: *ch 1, 1sc, repeat * until you reach the corner of the tail

Facial Assembly:Do this before joining the front and back piece.

Sew on the front of the turkey with respective color thread. 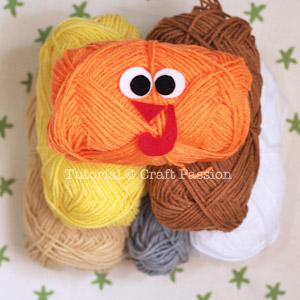 Get ready some fall color yarns, for example shades of brown, orange, yellow, grey and white.
Cut eyes, beak and snood from felt. 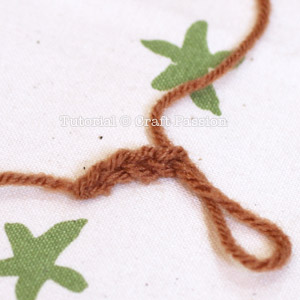 Plan the color combo and arrangement or refer to above photos for suggestion.
Slip knot on crochet hook, crochet 4 chains. 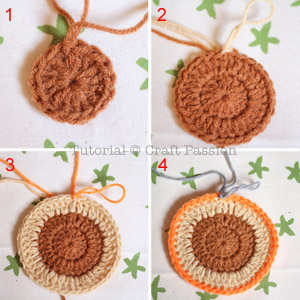 Follow crochet pattern above (rnd 1 to rnd 4) to make the turkey body. 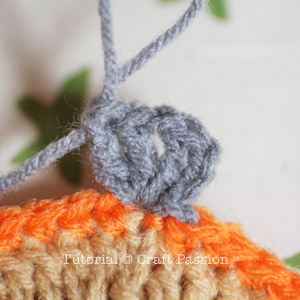 Begin to crochet turkey tail by making 10 sets of “2dc,ch1,2dc” for row 1.
Always begin each row from right hand side with right side facing you. 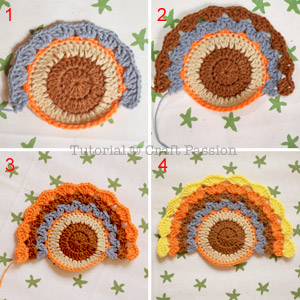 Follow crochet pattern above (row 1 to row 4) to make the turkey tail. 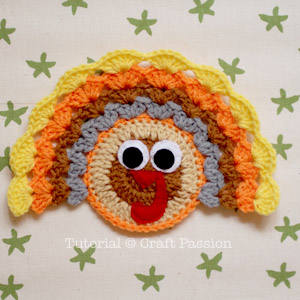 Once the front is done, weave in all ends to neaten.
Sew facial of turkey to the body. 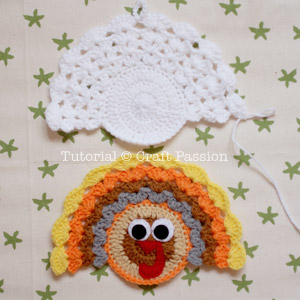 Crochet the back with single color yarn by repeating the front pattern, except that you can choose to either follow exactly, or, turn your piece as you work on the the tail.
Make a 10 chains hook loop at the middle of the last row. 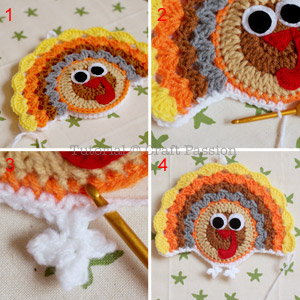 Place the front piece on top of the back piece, with wrong side facing each other. Line up edges.
Crochet along the edge towards the body. Stitches must go through both layers.
Crochet feet.
Crochet towards the turkey tail. 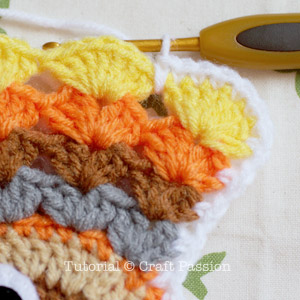 Single crochet 7 stitches on the shell and 1 stitch between the 2 shells. 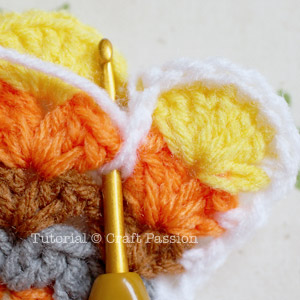 Crochet 1 chain, then single crochet again between 2 shell on the following row. 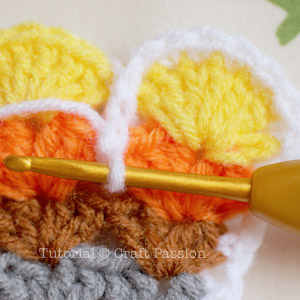 Repeat the stitches until you get to the bottom. 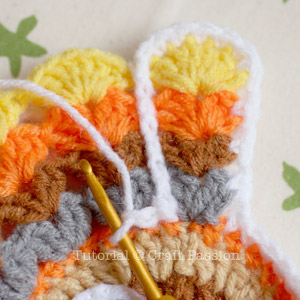 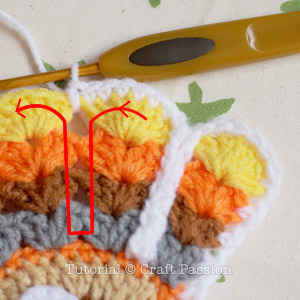 Continue to crochet by repeating the stitches for the rest of the tail details. 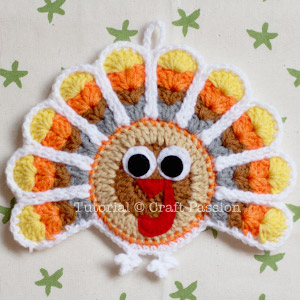 Slip stitch and fasten off the yarn when you reach the first stitch of the joining process.
Weave in the end.
Done! 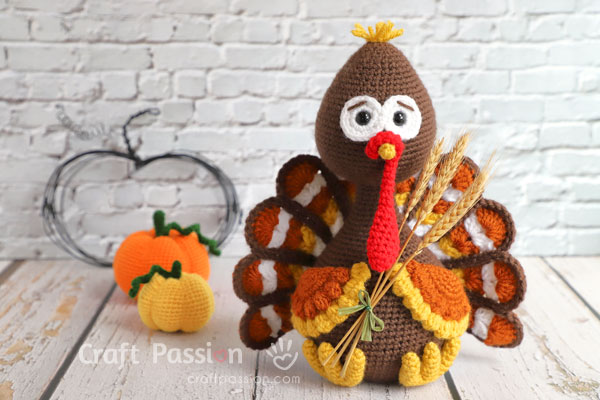 Tutt the Turkey Amigurumi is about 11.5" tall, crochet by using DK (or equivalent to 12-ply) acrylic yarn and crochet with a 3.0mm hook. The tail, on the other hand, was crochet by using a 4.5mm hook.
Continue Reading 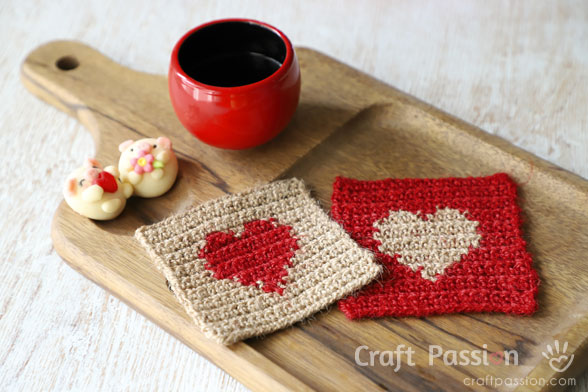 This Valentine Heart Coaster is a quick crochet project and a perfect all-year-round handmade gift to make. Even when it is not being used as a coaster, it is still
Continue Reading 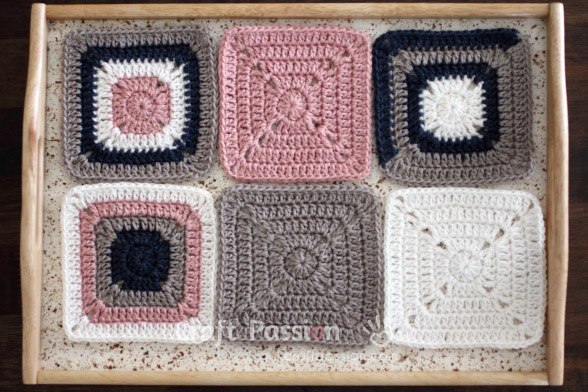 Remember the Flat Slip Stitch Granny Join tutorial I did a while ago? This is the crochet pattern of the Solid Granny Square I used to demonstrate FSS Granny Join
Continue Reading 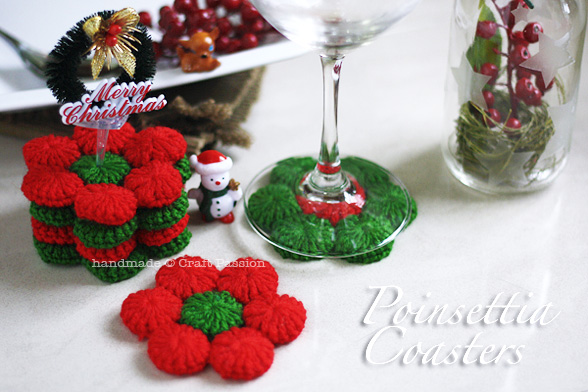 Are you done with Christmas crafting? I am almost done and I am so happy to have designed and made some Christmas theme coasters this year… I called them Poinsettia
Continue Reading 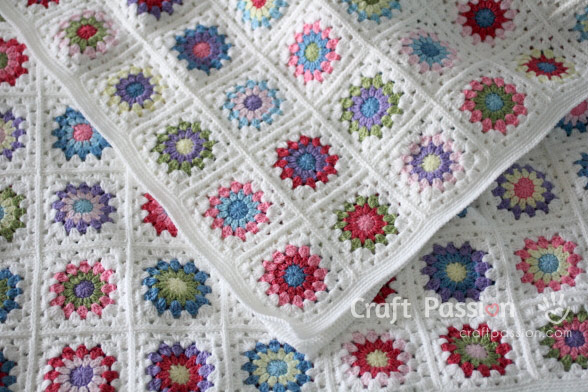 Here is the Sunburst Granny Square Blanket I have mentioned 2 weeks ago in the color combination tutorial. Wow…. finally, I have finished this blanket after the took off since
Continue Reading 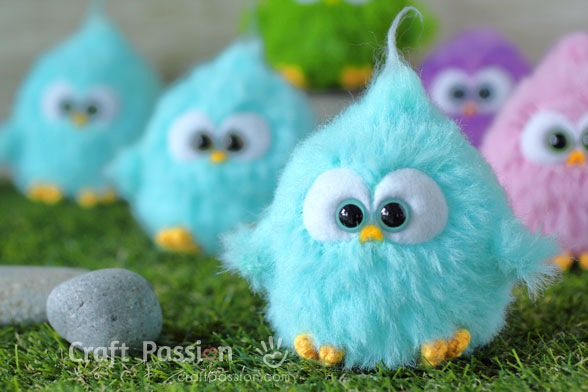 Inspired by the colorful furry baby birds in The Angry Birds Movie, here is the crochet pattern of my version — Fur Bird Amigurumi. Anyone who watched The Angry Movie
Continue Reading