It’s not every day you come across a crochet bucket hat in the stores; even so, they’re much pricier than those made of fabric. That’s why we’re pleased to share a free pattern on how to crochet a bucket hat. It may just be the one item you need to complete your summer outfit! They also make great gifts for friends and family.

This wardrobe staple has been in style for decades for practical reasons. Yet, people have been incorporating fun crochet bucket hat designs into their outfits as a fashion statement, and it has turned into an essential accessory since last summer.

This is an easy bucket hat crochet pattern that you can work up in just a day. Due to the material we used, this complete pattern may look like the yellow and blue crochet sun hat we made a few years ago, except for the little extra stitches design we made on this shorter brim crochet bucket hat. However, in general, bucket hats and sun hats are typically used under different conditions.

Sun hats are made with light and breathable materials like wheat straw or raffia yarn for leisure, such as gardening or chilling on the beach. On the other hand, bucket hats are often made out of durable fabric like cotton, canvas, or polyester for outdoor activities like fishing or camping. One similarity is that both the bucket hat and the sun hat provide coverage for the face and neck. What about this crochet bucket hat made out of raffia yarn? It serves both activities as a multi-purpose hat!

Besides being a summer hat by crocheting it with raffia yarn, you can easily adapt this pattern to crochet bucket hats for winter. How? Simply crochet the hat with a warmer yarn of similar yarn weight. A sport-weight yarn in wool fiber can be a great choice in this case.

Keep reading to find the photo tutorials and the written crochet pattern. Since this is a crochet wearable, make a swatch to ensure you get the correct gauge before starting the free bucket hat pattern.

The finished hat fits a head circumference of 22″ to 23″. It has a crown depth of 6.5″ and comes with a slightly longer front brim (2.5″) than the rear (2″). The hat has a beautiful design around the crown band which is not only presenting its uniqueness but also makes it more “breathable” for the summer.

The main supplies required to make this easy crochet bucket hat pattern include raffia yarn and a 3 mm crochet hook. I used Oatmeal #7924 for this crochet hat; however, feel free to choose a different color (from a total of 31 color choices) to suit your outfit or personal style. You will need some fishing line, adhesive tape, and stitch markers as you progress. Then, make a crown block from our last sun hat tutorial and prepare a warm iron to finish this project.

How to Crochet a Bucket Hat

Begin from the crown of the hat by working eight single crochet stitches into a magic ring, then follow the written crochet pattern to increase the stitches at each round as you progress. To keep track of your rounds, insert a stitch marker at the beginning of every round.

The last section of this free crochet pattern requires you to crochet a fishing line into the last two rounds of the brim. This is for additional structural support to ensure the brim stays opened. If you prefer a stiffer brim, use a thicker fishing line. Some would prefer spraying the hat with a stiffening agent, e.g., fabric stiffener or laundry starch.

Finish off blocking and ironing the crown and the brim for a more well-rounded shape. This crochet hat is made for an adult head. Nevertheless, the measurement of the crown size can be adjusted slightly according to the size of the crown block. With a condition where you need to reduce the head size to fit a smaller head, you may use this product without altering the crochet pattern. You may also add a sweat liner to the hat during hot days to keep the hat dry and comfortable.

Crochet bucket hats are making a comeback thanks to fashion icons like Bella Hadid. It gives off this 90’s vibe that many people have been obsessed with lately. If you prefer a more adorable design, check out the crochet hat pattern with Yo-Yo Puff. Let us know if we’ve got you on the bucket hat trend, and don’t forget to share your work with us on social media! Who knows? It might become your next favorite accessory 😉 Happy Crocheting!

This pattern begins from the crown and works toward the brim.
IMPORTANT: Cut a length of approximately 10 yards of yarn and reserve it for the partial rounds (Round 5a & 8a) at the Brim pattern below.

(This crochet cable stitch can be replaced with any crochet pattern in a multiple of 4 sts.)

MORE DETAILS ON HOW TO CROCHET A BUCKET HAT

MORE DETAILS ON HOW TO CROCHET CABLE STITCH PATTERN 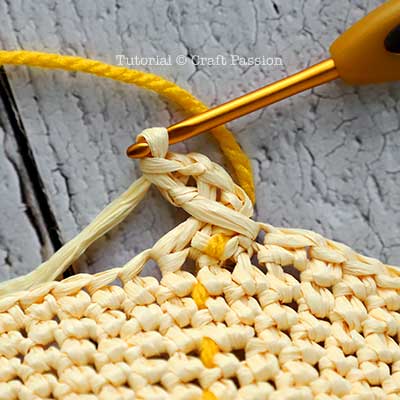 PIC. A
Begin the cable stitch with a modified cable stitch: instead of skipping sts, we crochet the long cross dc into the preceding round. 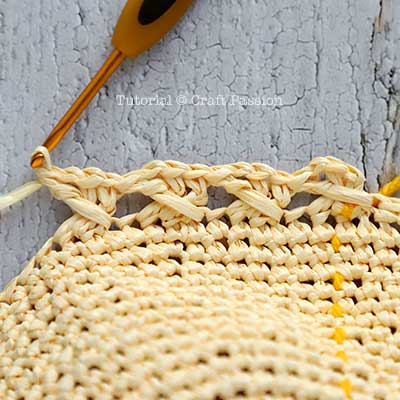 PIC. B
Follow by the Cable Stitch mention above. 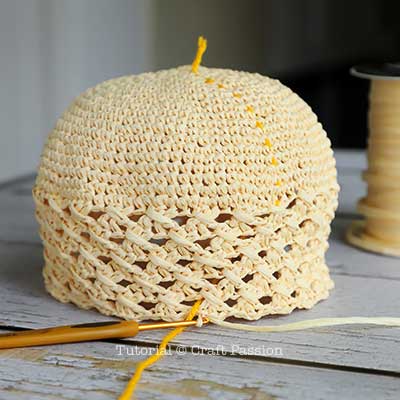 PIC. C
After 5 rounds and turn upside down. 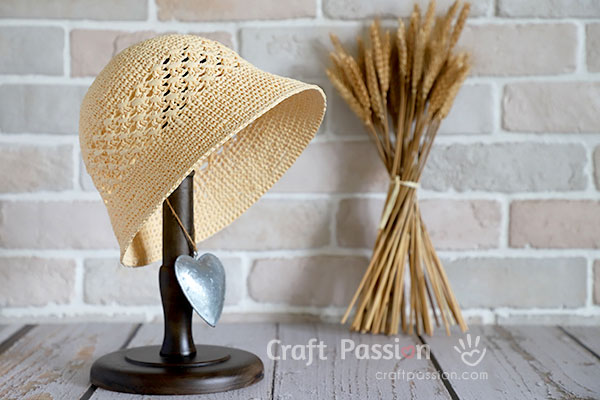 Feel free to try out our other free patterns and tutorials on summer-themed crafts.

Get the full article at https://www.craftpassion.com/free-crochet-bucket-hat-pattern/

Purchase the exact same material used in this pattern from Craft Passion Shop.

Thank you for sharing such beautiful bucket hat pattern. But I don't quite understand how to remove the yarn using in the partial rounds. Pic. 3 shows two grey yarns but I don't see the gray yarns showing in Pic. 9. Are the partial rounds necessary?

That "grey" color is actually my highlight to show on the partial round, it is still using the oatmeal color yarn. Sorry for the confusion. You definitely can omit the partial round with slight modification to the brim pattern but we highly recommended to follow the original pattern as this will give you a slightly wider brim at the front of the hat.

Hello Can we make this hat with cotton yarn

Yes, only if you can get the tension gauge correct. That's to make sure that it is sized correctly.

I need to learn to crochet!!! you have the best patterns, hats,totes and all the sweet Amigurumi <3 I've saved so many,hope to learn when I retire next year. Thank you

Is a video available for this Crochet Bucket Hat Pattern? Thank you for the pictures and narrative, but PLEASE send me a link to video as I am a visual learner. I will be gathering the supplies that are needed. THANK YOU SO MUCH!