Need an accessory for your upcoming holidays? Learn how to crochet a hat for summer or sunny days with this free pattern. This free crochet hat pattern is designed with you in mind.

In this easy hat crochet pattern, I am sharing some helpful tips on how to make a  beach hat that fits snugly for various head circumferences, how to maintain the structure of the brim to stay wide and open, how to make the crown round and smooth, etc. All you need to know to make a beautiful crochet hat will be covered in the pattern section.

WHY DO WE NEED THIS CROCHET SUN HAT

While we enjoy warm hugs from the sun, it is pertinent to realize that the ultraviolet rays emitted from the sun are pretty harmful to our bodies. According to the American Cancer Society, being exposed to UV radiation for an extensive amount of time increases the risk of skin cancers. UVA and UVB rays from the sun do not only contribute to the development of skin cancer; they too damage our skin by disrupting our cellular DNA, causing sunburns, premature aging, wrinkled skin, and the formation of dark spots.

One of the many ways to protect ourselves from the harmful effect of these rays is to be under the shade. If there is no shade to hide from the sun, we ought to wear a proper outfit or apply sunblock to the exposed areas of our skin. For head covering, wear a hat with a wide brim that will shade your face, ears, the back of your neck, and shoulders.

This crochet sun hat is my best companion during the last summer vacation. Not only did the crochet hat provide protection from the sun, it has also enabled me to have a vacation with a touch of fashion. I would say that’s a win-win situation!

HOW TO CROCHET A SUN HAT

Before we begin crocheting a hat, first, we ought to prepare the materials and tools. This easy project requires crochet raffia yarns (you may use spot-weight acrylic yarns), a roll of nylon fishing line, adhesive tape, lace trim, and a leather cord.

As for the tools, do prepare a crochet hook, stitch marker, tapestry needle, and steam iron to shape the finished hat.

I used approximately 2 rolls of Raffia with Passion yarn of solid colors coupled with a 2.5 mm crochet hook in single crochet stitches, working from crown to brim edge.

IS THIS CROCHET HAT PATTERN FOR BEGINNERS?

This is an absolutely beginner-friendly crochet hat pattern. However, if you still feel anxious about challenging this free hat crochet pattern, it would be a good idea to go through my guide to crochet to obtain a better understanding of how crochet works. You will get all the details from yarns to tools, how to hold yarn, and how to crochet all these basic stitches. You may also check out helpful video tutorials online on basic crochet stitches such as this and this to aid in visualizing the stitch pattern.

Since this crochet hat pattern is crocheted with raffia yarn, some call it raffia hat, raphia hat, or straw hat. I guess you could even call it a beach hat, as a wide-brim sun hat is mostly worn at the beach at holiday resorts. Or even a floppy hat as the wide brim gives it a slouchy appearance.

Speaking of a slouchy hat, do you still remember the free crochet straw hat pattern I shared many years ago? It is also made out of one of my favorite yarns to work with. You may also be interested in this beautiful crochet bucket hat too.

A BEACH BAG TO GO WITH THE HAT?

In addition, I have updated 2 oversized beach tote bag crochet patterns that you can pair with this crochet hat pattern. Both of which are featured in the photos here. The Giant Shell Stitch Beach Tote is the one in yellow, whereas the blue one is the Diamond Stitch Oversized Tote.

MORE DETAILS ON HOW TO CROCHET A SUN HAT

Before continue to finish up the brim, DIY a crown block by making a ball of 23 to 24″ circumference with newspapers and masking tape. This ball is for blocking the crown of the hat. If you have a commercial wooden crown block, it works the same. 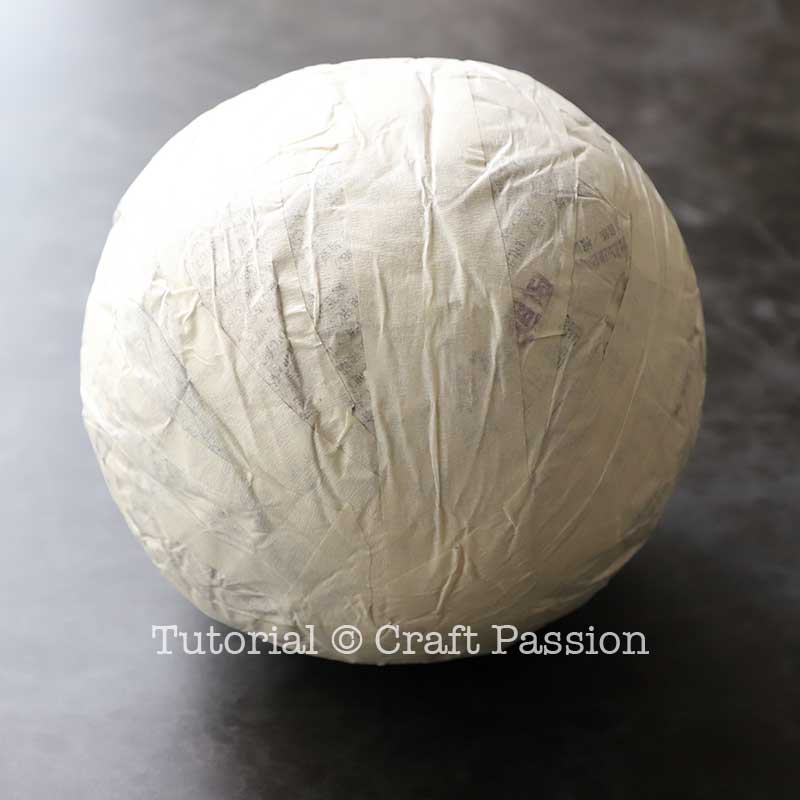 Wrap the ball or your crown block with an old t-shirt, tie it securely. 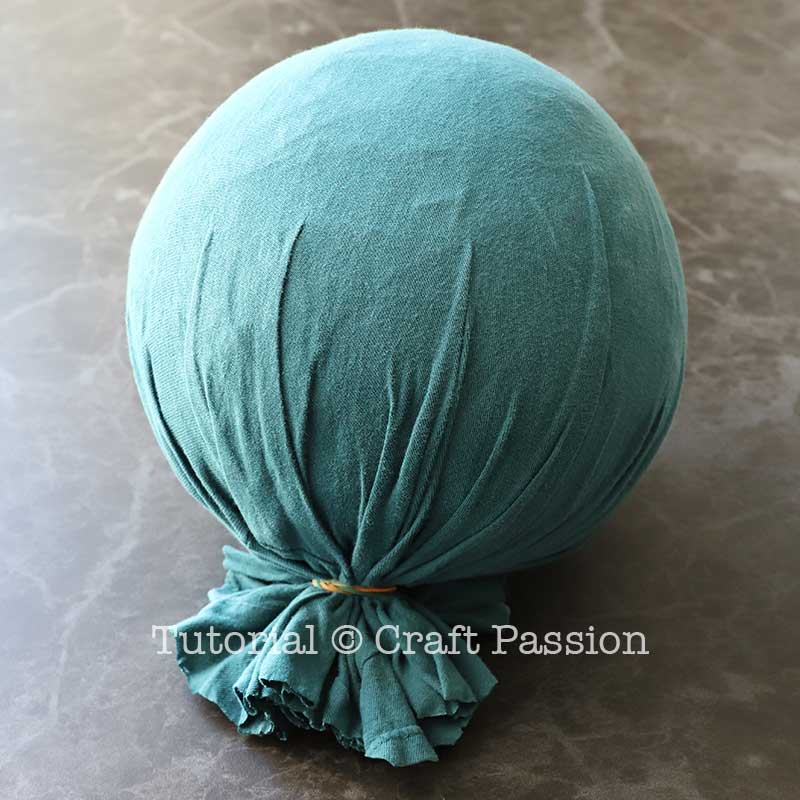 Warning! Always test the temperature of your iron on a test gauge piece before do it on your hat to ensure you don’t burn your hardwork with high temperatures.

Add Cord To The Band For Sizing

Line a lace at the band of the beach hat, you may pin the lace in place so that it is easier for you to work. Draw the leather cord through the holes of the lace and through the hat. Wear the hat on the head and pull the cord until it fits your head, tie the knot to lock the cord. Adjust the lace nicely and tie the knot to the lace as well. Trim the ends. 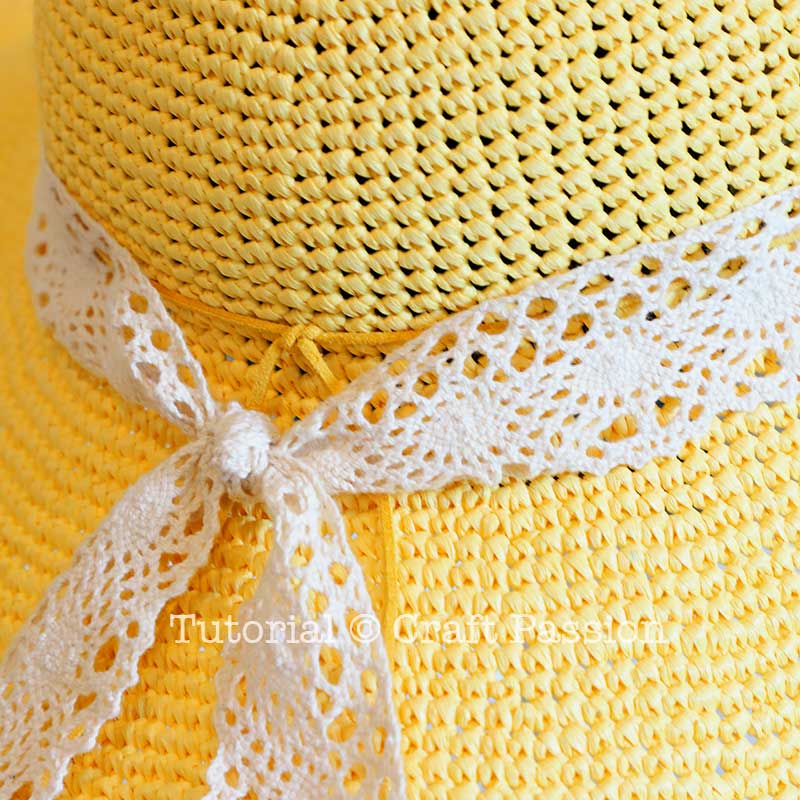 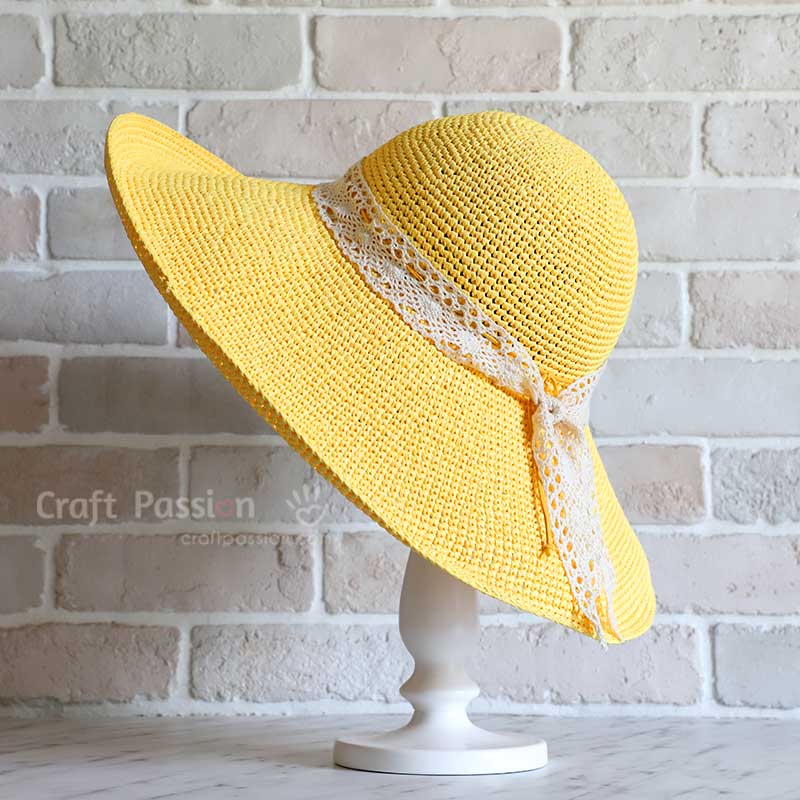 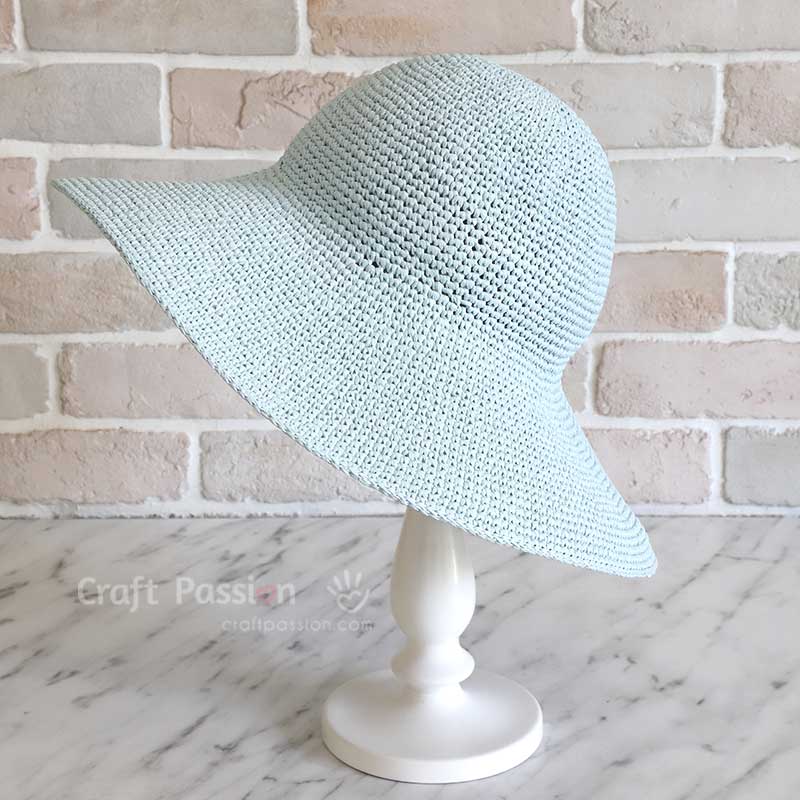 This is the narrow brim beach hat before adding the band. 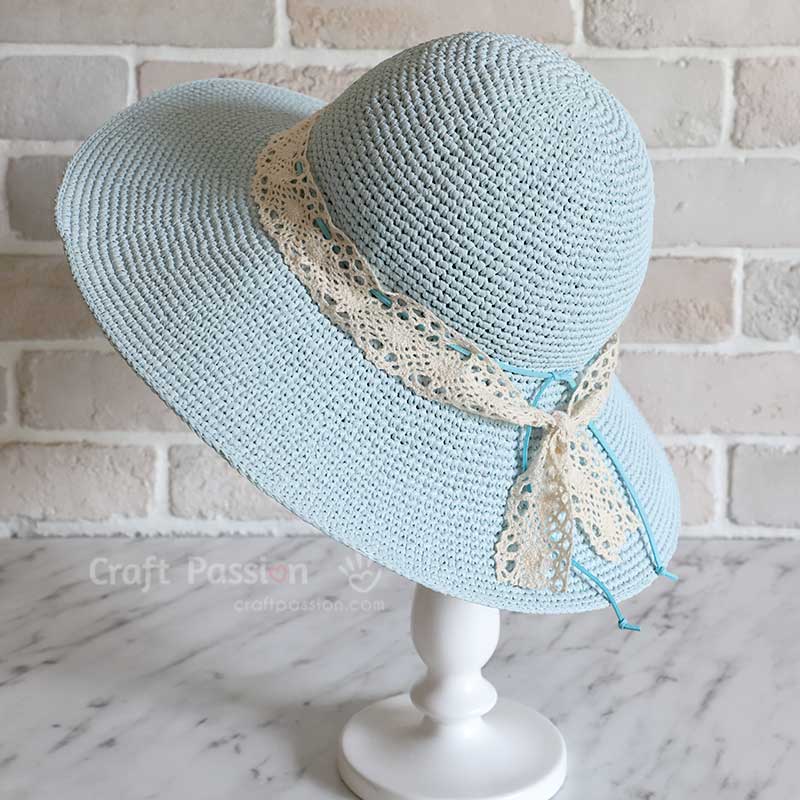 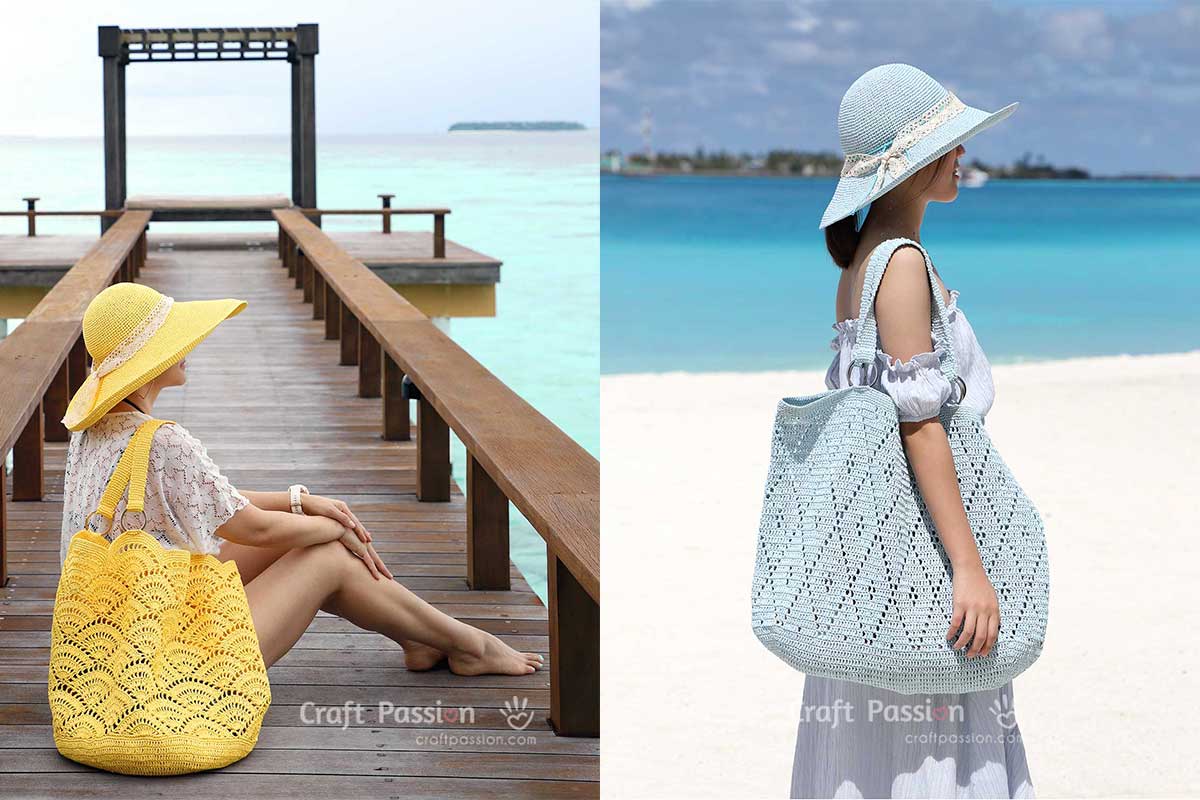 Crochet a matched color beach tote to uplift the style!

Feel free to try out our other free patterns and tutorials on summer-themed crafts.

Purchase the exact same material used in this pattern from Craft Passion Shop.

Where can I find the fish line? My husband's fishing line is very thin, will not hold the brim wide like yours. I am in Vancouver Canada, thanks, Leah

Please try the hardware or DIY store, they should carry these fishing lines.

I am making the Wide Brim version of this hat, & I have LOVED every minute of it! I am using JOANN brand Rafia yarn, a size E crochet hook, leather craft cord & 18 gauge craft wire from Walmart. The pattern is so easy to follow & I appreciate you making this a free pattern! I am going to Florida on vacation with my family next month, there are 4 of us girls going, & I wanted a sunhat for all of us. I will be using this pattern for all of them. I will be posting a pic of my finished hat(s) on Instagram & I will be sure to tag you (for credit as the designer, obviously). Again, I just wanted to thank you so much for sharing your talents & creativity with the rest of us. This Sun Hat is gorgeous & I am thrilled to have found it!!! :)

I used 100 lb fishing line and it looks nothing like in your pictures and is not holding the brim up at all. My hat is extremely floppy. I think my only option is to add in a round or 2 of metal wire to actually hold it up.

How do I get the pattern AND the tips with pictures below. I only have the option to print the instructions

We will update this option soon.

Translation (by Google): hello, I would love to order this raffia yarn, but I live in France and we are euros and not dollars: what should I do? thank you

Please change the currency at the top right corner of the store's website to Euro, we accept major currency and ship worldwide. Thank you.