I made this kitty coin purse for my absent-minded daughter who always lost or misplace her belongings. The size of the Kitty Coin Purse is just nice to keep some coins and small notes that she can put in her school uniform’s pocket. The dimension is 8.5cm (W) x 8cm (H) [3 1/4″ x 3″].

Like mother like daughter, I was an absent-minded kid myself too (looks like she inherited my bad gene, lol). Well, she lost the crochet purse I gave to her. She knew that she is in big trouble since I love that purse a lot (she begged me a few times before I agreed to give her while waiting for her new purse). That purse was a masterpiece that I am going to write the pattern out and share here one day. I had a mixed feeling when she told me that she has lost it at school. Sad that the purse is lost, happy that she expressed regrets about her carelessness and will try to be careful next time. With the blessing of God, she found it from the school’s lost and found department! I am happy, not because the purse is recovered but my daughter has learned to become a more responsible person! This incident has accelerated the process of getting this kitty coin purse done. I made them in 3 different color themes, 1 for her and 2 for spare, just in case she lost it again. **wink wink**

Originally, this Kitty Coin Purse was not the one in my mind, I wanted a tiger but it came out too cute, so… I ended up having a kitty instead!!! Why tiger? The upcoming Chinese New Year is a Tiger Year 🙂 Am trying one out now, hope I can make it looks more fierce!!! [Update: the Tiger Coin Purse free pattern is out for grab :)]

Well, let’s go to the tutorial on how to sew the Kitty Coin Purse!

MORE DETAILS ON HOW TO SEW
KITTY COIN PURSE 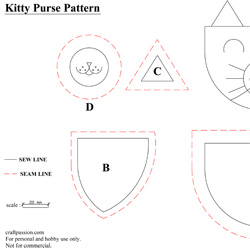 Download and print out the pattern, then cut the template out from paper. Then, trace the pattern to the fabric. 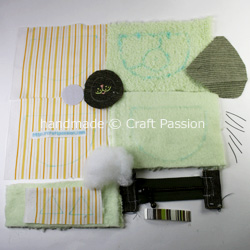 Cut out the fabrics according to the pattern.
1. Outer fabric – pat. A (SL)x 2pcs, pat. C (SL) x 2pcs.
2. Inner lining – pat. A (SL) x 2pcs, pat. C (SL) x 2pcs.
3. Embellishment fabric – 1 pc. for each pat. B & D. Pat. B is the blot patch on the kitty’s face.
4. Fold the interfacing with the adhesive surface facing each other, iron it and let it cool. Cut pat. D (XSL) on the interfacing or cardboard.
Embroidery the nose and mouth on pat. D fabric.
Remark:
Pat – Pattern
SL – with seamline
XSL- without seamline 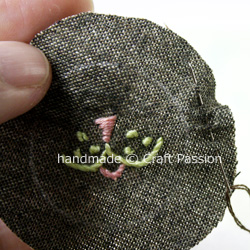 Run some stitches along the mid of the seam allowance of the nose. Pull the thread to create gathers after complete sewing a circle.

Insert some poly-fill into the nose. Put in the circle interfacing or cardboard to the top of the poly-fill. 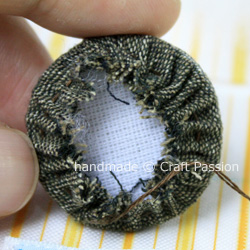 Press the circle interfacing and pull the thread until tight and make a knot. 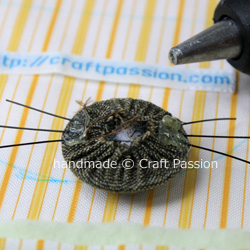 Position the bristles by inserting them between the gathers of the nose. Apply hot glue to hold them in place. 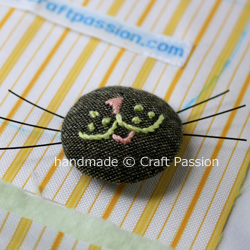 The right side of the nose. 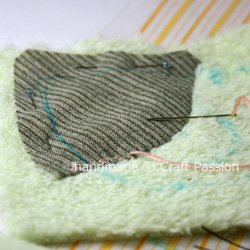 Now, sew the blot patch on the kitty’s face. Slip stitch it then sew a line of running stitch on the surface about 2mm from the border. 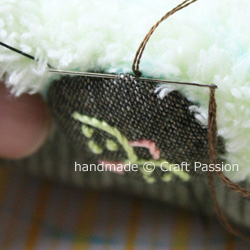 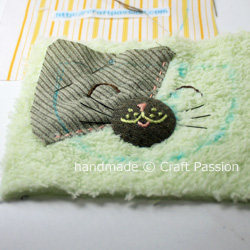 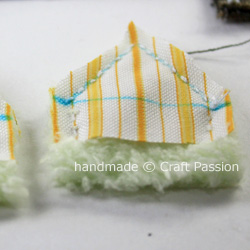 With the wrong side facing each other for pat. C (the ear), sew and turn the right side out. Use a turning tool or anything pointy to make the ear tip pointed. 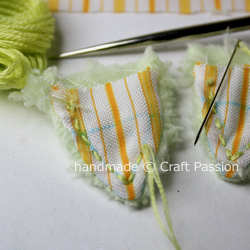 Again, just like the blot patch, sew a running stitch on the ears. 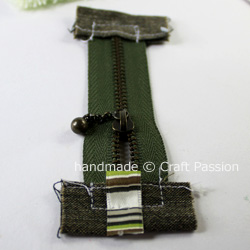 Cut the zipper to 10cm (4″) length.
You can fold 2 pieces of fabrics and sew them to the ends of the zipper respectively [as shown] if you don’t want the zipper goes all the way from corner to corner.
Fold a short length of ribbon to half and sew it in place to make a tongue or hook for the key chain. 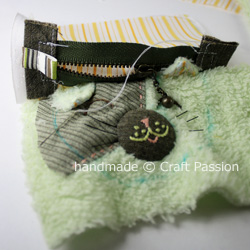 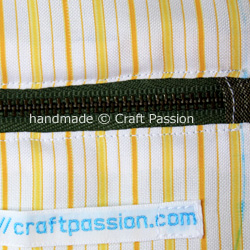 Sew a line across the inter lining and zipper. If you are not using polar fleece but thinner material like cotton fabric, you can press the outer fabric together. 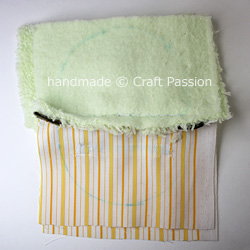 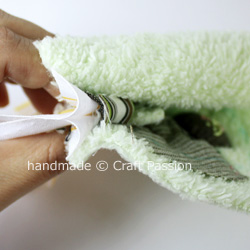 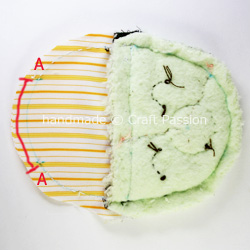 Sew a line from A to A and leave a space of about 2 ” at the inner lining. We are using this opening to turn the purse inside out.
*Be careful not to sew the side of the ribbon tongue.* 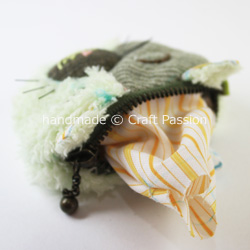 Turning the purse inside out. Grab the Polar Fleece from the opening and pull it out. Next, push and arrangement all the corners nicely. 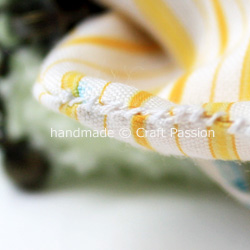 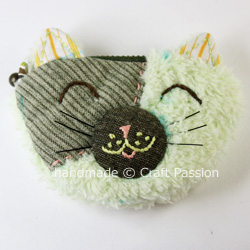 Done! Apply some water to erase the marker and the Kitty Coin Purse is ready to be used. 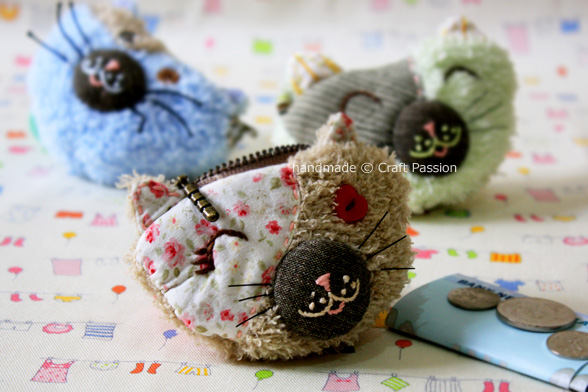 […] Tiger Coin Purse is the original idea of what I want to design and make instead of the kitty coin purse!!!! The test purse turned out too gentle and cute, so I made it into a kitty purse. This one, with […]

do you think she will lend the kitty purse ??

I have been looking for something that I might actually like to do and I think little purses may be it. Thanks for the inspiration.

I have included this in my Gifts To Sew For Christmas round up http://jojoebi.blogspot.com/2010/10/lots-of-gifts-to-sew.html thanks jo

that coin bag is so adorable.