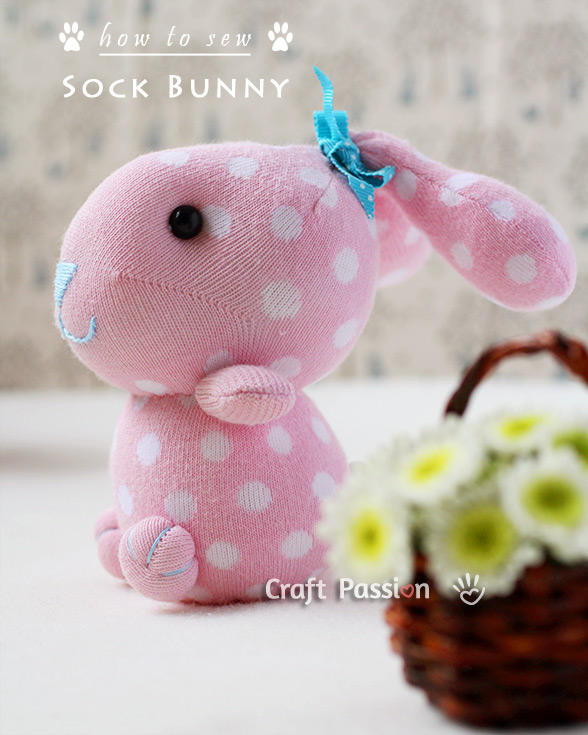 After a great success on making a bunch of sock monkeys, I challenged myself sewing another sock toy… this time I designed and sewed sock bunny. I hope you like Baby the sock bunny as well.

Not only this, but I have also got a piece of good news to whom who loves bunny, I have another version, a kawaii version of the bunny, {update: here it is, the droopy eared sock bunny sewing pattern}. 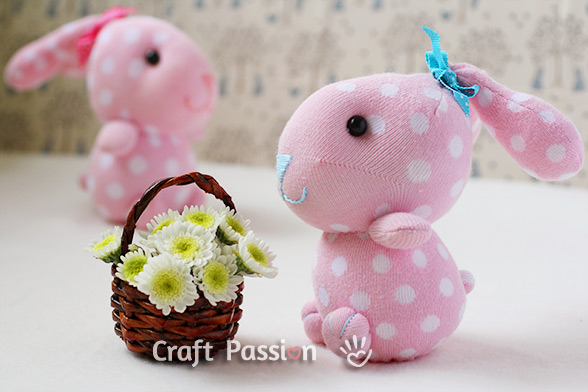 The sock bunny can’t sit on its own, I pinned them down for photography purpose. You may add beads or rice to make the bottom heavier so that it can sit properly. Add the rice or beads in a small sachet and insert them into the body before closing up the opening to avoid the small particles from slipping out from the sock. Otherwise, you may add a string on its head to hang it up. Pinch the head and lift it up to find a balancing point to add a string to hang. 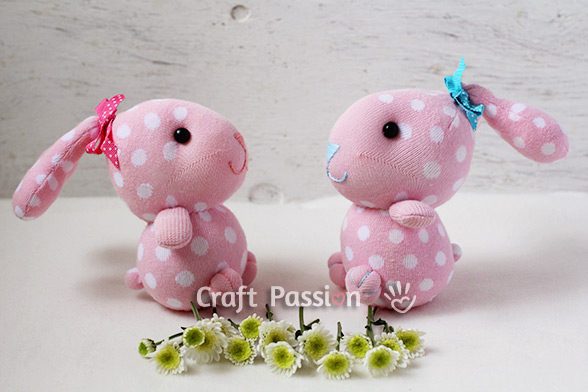 [If you are interested in the felted carrot shown in the background, here is the tutorial to make it.] 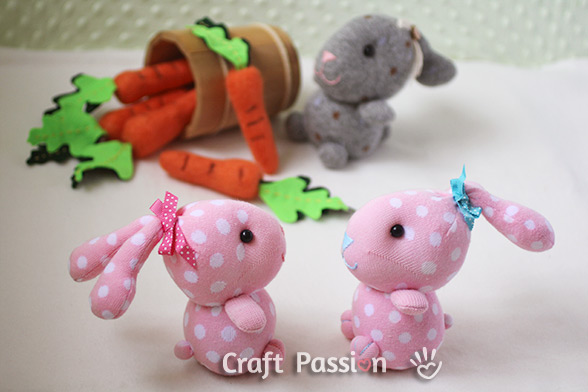 MORE DETAILS ON HOW TO SEW
BABY THE SOCK BUNNY 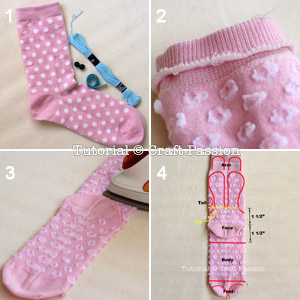 1. Gather all the materials and tools listed above.
2. Carefully unpick the folded cuff at the wrong side with scissors or seam ripper.
3. Turn to the wrong side and iron the sock flat with the foot facing up.
4. Draw the sock bunny pattern on the sock with a water erasable fabric marker. 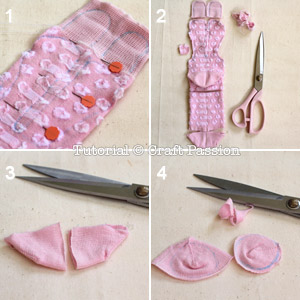 1. Pin the layers and sew with sewing machine or hand. Sew ears and arms only.
2. Cut the pattern out from the sock with minimum 1/8″ seam allowance.
3. Split the toe part into half.
4. Draw 2 circles and cut them out. 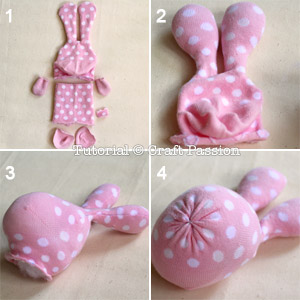 1. Turn the sock right side out, face, body, arms, feet, and tail.
2. Stuff ear with poly-fill stuffing material. Only stuff the end and leave the area near to the head lightly stuff.
3. Stuff the face too, shape it such that the heel of the sock becomes the mouth of the bunny.
4. Run a round of stitches near to the raw edge, put to close the opening. 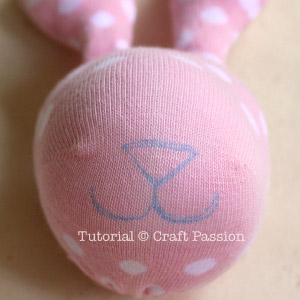 Use a water erasable fabric marker, sketch nose and mouth on bunny’s face. 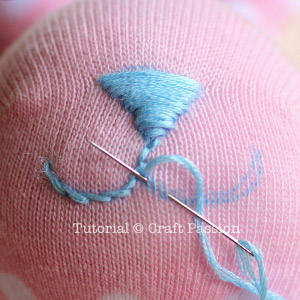 Satin stitch the nose and brunch stitch the mouth with 6 strands embroidery floss. 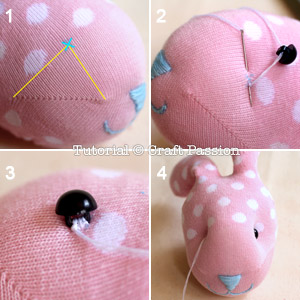 1. Mark the eyes position by projecting a line horizontally from the toe side, intersects with a line from another point of the seam line of the toe.
2. Sew a black shank button to the marking.
3. Make a few stitches so that it is securely fastened on the sock.
4. Bring the needle to the other point via the stuffing, pull tight to “sink” the eye into the face. Knot the thread on the marking before sewing the second eye. 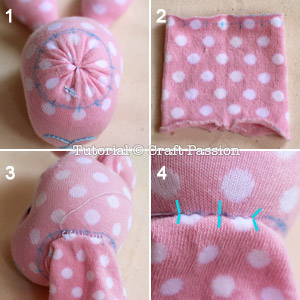 1. Draw a circle at the bottom of the face. Divide the circle equally into about 12 parts.
2. Draw a line at the body and equally divide the spacing into 12 parts too.
3. Slipstitch the body to the face follows the markings.
4. The markings will make sure that the body and head are properly matched. 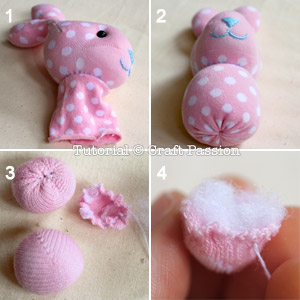 Stuff up the body, feet, arms, and tail. Run stitches near the raw edge, pull to close the opening.
For feet and tail, roll the poly-fill on your palms to make it round and small before wrapping it with the sock.
For the arm, slip stitch the opening instead of running stitch. 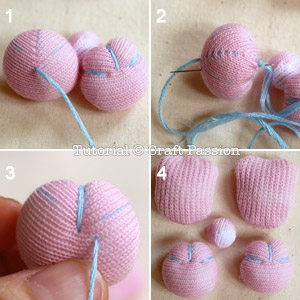 Mark 3 lines on the bunny’s foot. Sew with embroidery floss to shape the foot. 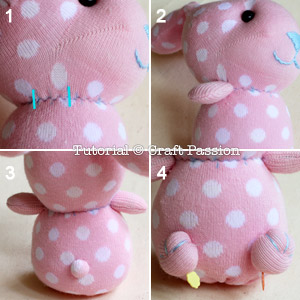 1. Mark arm position on the side of the bunny.
2. Slip stitch around the arm to the body.
3. Mark and slip stitch the tail in place.
4. Repeat the same to the feet.

Sew Feet, Arms and Tail to the Sock Bunny 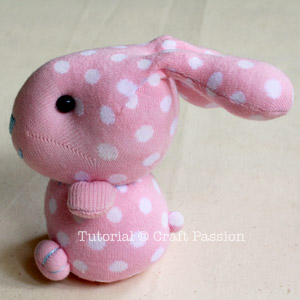 Make a few stitches to tight the ears together. 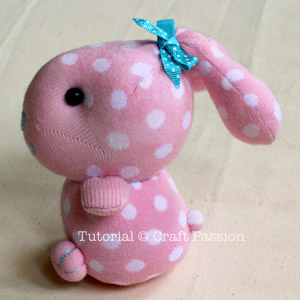 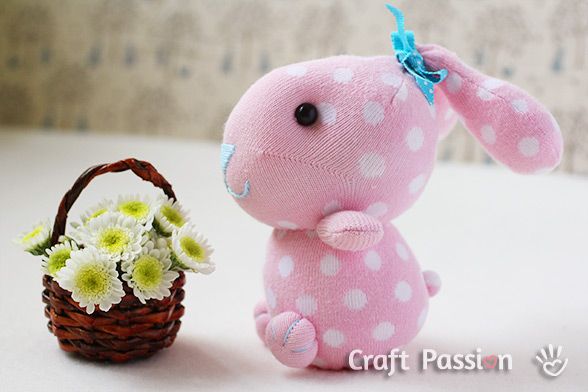 Socks will be stretched after they are stuffed so thick socks that are close-knit make better quality sock sloth toys. 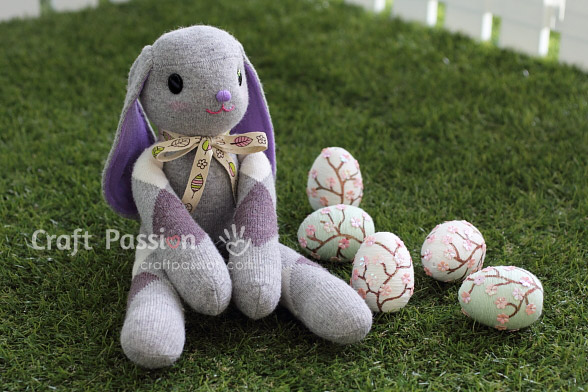 Can you believe it, I sewed another sock bunny for the Easter!!! After the 2 versions of sock bunnies (this and this) I did 2 years ago by using a
Continue Reading 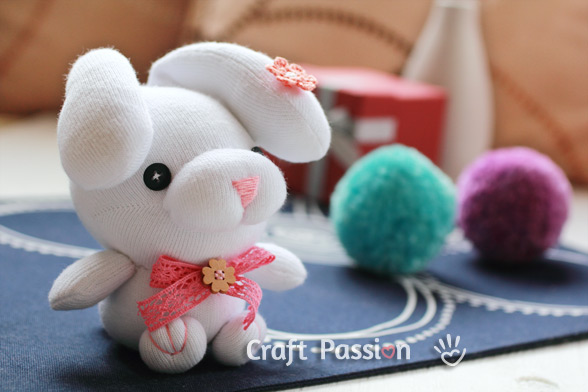 As promised in my previous sock bunny sewing tutorial, here comes the kawaii version – BiBi the “Droopy Eared Sock Bunny”. This bunny can sit on its own, it is
Continue Reading 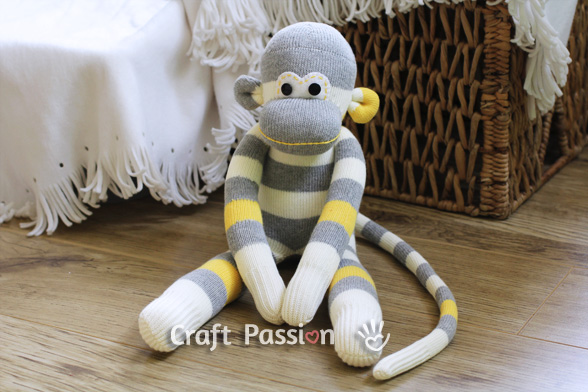 It’s April! A time for spring to start showing her face, bunnies to start hopping and Mother Earth to wake up after her sleep. It’s also Earth Month, which means
Continue Reading 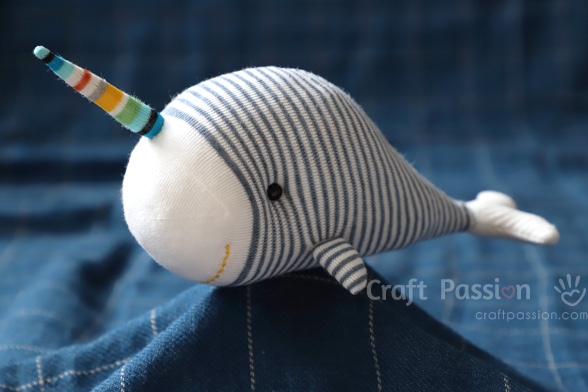 The Sock Narwhal (Unicorn Whale) is sewed from an adult ankle sock. The length of the sock narwhal is roughly 9" long from head to tail. For your ease of sewing, a free pattern template is included along with the details of the instruction.
Continue Reading 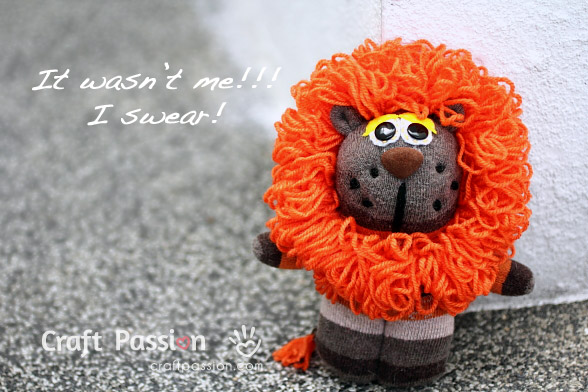 Sewing sock toys are easy, take my word, yes, it is easier than you anticipate. This is the 4th sock toys designed and created in Craft Passion, I can foresee
Continue Reading 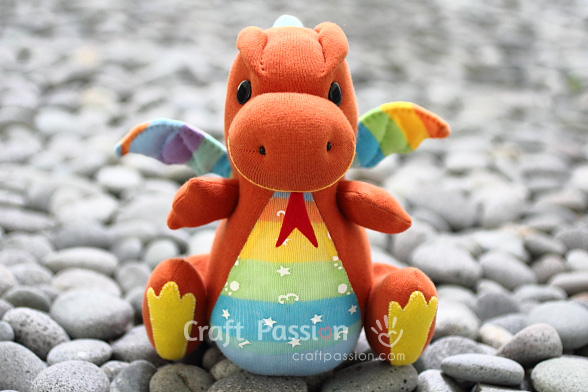 After designed, developed and shared several sock toy sewing patterns with you, here is another sock toy pattern which is more challenging to sew, Drake the sock dragon. If you
Continue Reading